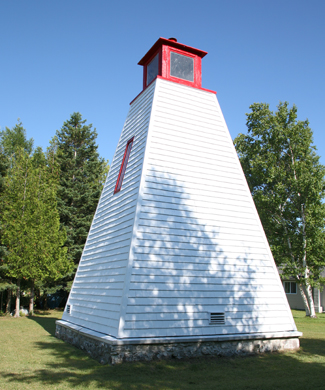 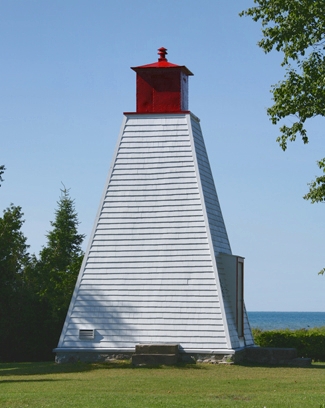 To form a protective harbor at Southampton, two breakwaters were constructed: one extending seaward from the beach in Southampton, and a second arching towards the mainland from the northern tip of Chantry Island. A pair of range lights, known as Southampton Harbour Range, was built in 1876 to help guide mariners through the 400-foot gap in the breakwaters and into the protected anchorage. The front light was placed at the eastern extremity of the breakwater connected to Chantry Island, and the rear tower was erected on the northern cape of Horseshoe Bay, just south of Southampton. Robert Reed was paid $649 for building the towers, and E. Chanteloup of Montreal received $380.11 for supplying the lanterns and lighting apparatuses. As they were completed late in the season, the range lights were not placed in operation until May 5, 1877, with David Cascaden being paid an annual salary of $100 to care for the rear light and Duncan McGregor Lambert, the keeper of Chantry Island Lighthouse, receiving $75 to look after the front light. The following description of the new lights was given by the Department of Marine: The front light, which is fixed catoptric, is on an open framed square tower 25 feet high on the eastern extremity of the western breakwater pier 2,800 feet from Chantry Island Lighthouse. This lighthouse shows red to the northward and white inside the harbour and should be seen seven miles. The back light is on an enclosed square tower 28 feet high, standing on the south of the landing pier, 2100 yards from the front light. It consists of a fixed white catoptric light elevated 34 feet above water mark, and should be seen ten miles in ordinary weather.

Keeper Cascaden had a family of seven children and was responsible for one mammoth flat-wick lamp set in a seventeen-inch reflector inside the rear towers iron lantern room.

In 1878, a pier and boathouse were erected at the outer end of the breakwater to help Keeper Lambert maintain the front light, after Darius Smith, the Superintendent of Lights above Montreal, had reported the following the previous year:

The range light on the end of the breakwater is of trellis work, painted white, 12 feet square at the base, has an iron lantern 4 feet square, and has one flat mammoth flat-wick lamp with 17 inch reflector; and shows a red fixed light, and is in first class order.

The upper portion of this range light requires to be enclosed, to enable the Keeper in bad weather to stay in the lighthouse; also the lantern requires to be cut or changed, so that two panes of glass may be inserted, one to the south for the use of vessels entering the piers, and one to the east to show up the channel to the eastward.

The breakwater is at present without any protection for the Keeper in bad weather, and is most dangerous, as the sea rushes over it, making it almost impossible to pass along. I would recommend that iron posts with a chain should be placed the whole length of the pier, which is 2,260 feet long, the posts should be about 15 feet apart and to screw into the pier.

In 1901, the rear tower was relocated 1,800 feet across Horseshoe Bay to McNab Point at a cost of $1.39. This change was made after a hydrographic survey of Lake Huron revealed a better channel for entering Southampton Harbour than that marked by the previous alignment of the range.

A steam fog whistle was established atop Southamptons brick waterworks building in 1905 to help mariners enter the harbour. The building was situated just south of the mouth of the Saugeen River, and the whistle gave two five-second blasts every minute.

Laura Macaulay provided the following recollection of her trips to the rear range light in the 1920s, when her grandfather John Buckley was serving as keeper:

To the right of the door was a huge metal tank filled with coal oil, (kerosene), it had a distinct odour. A supply boat would come in once or twice a year. It had to anchor in the lake and the coal oil was brought in smaller amounts. There was great excitement when the supply boat arrived. Grampa would fill a container with the coal oil; he knew exactly the amount he needed.

We followed him up two flights of stairs, he pushed up the trap door, we had reached the important thing. There was a large Coal Oil lamp with a dirty chimney because it had burned out earlier. He filled the lamp, cleaned the chimney and checked the wick. One more job  the huge silver reflector behind the lamp had to be polished. Finally he lit the lamp and everything was finished for another day. I dont remember him ever missing a day.

When the front range light was discontinued in the late 1950s, the rear range light remained active as Southampton Harbour Light until at least 1971. By 1974, the tower was back in operation as McNab Point Lighthouse and was equipped with a marker radiobeacon that operated on a frequency of 306 kHz.

In 1988, the Canadian Coast Guard placed aluminum siding over the exterior wooden shingles. This cost-saving move resulted in moisture collection under the siding and dry rot. The siding was removed by the Marine Heritage Society in 2008, and new shingles were placed on the tower to correct the problem. After receiving a new coat of paint, the tower is again in fine condition, though the light was discontinued in 1989. The Marine Heritage Society hopes to eventually return the light to service as a private navigational aid.

On August 3, 2012, the Honorable Peter Kent, Canadas Environment Minister and the person responsible for Parks Canada, designated the Saugeen River Range Lights and McNab Point Lighthouse in Southampton, and St. Paul Island Southwest Lighthouse in Dingwall, Nova Scotia the first heritage lighthouses designated under the Heritage Lighthouse Protection Act passed in 2008. Im delighted to feature these four noteworthy examples of Canadian lighthouses as our first designated heritage lighthouses, said Minister Kent. With the help of local communities, the Government of Canada hopes to protect as many examples of these important symbols of our seafaring heritage as possible. Concerned citizens have demonstrated their determination to preserve the lighthouse and are worthy of having it included in the first batch of heritage lighthouses.

For a larger map of McNab Point Lighthouse, click the lighthouse in the above map.

The lighthouse sits in the backyard of a private residence, so is best seen from the water. A distant view is possible from Chantry Island.

The lighthouse is owned by the Town of Saugeen Shores and leased to the Marine Heritage Society. Grounds/tower closed.