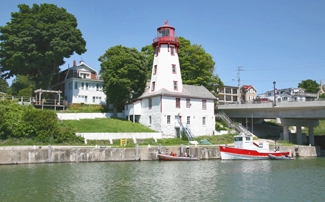 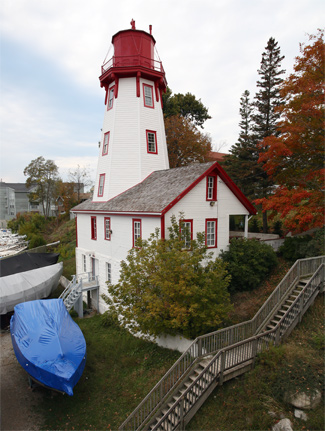 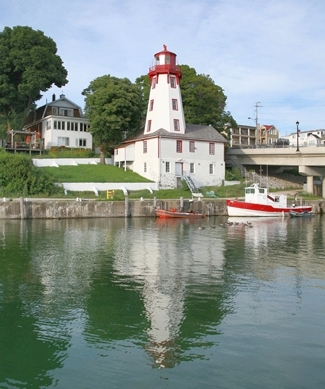 James Bruce, eighth Earl of Elgin and Kincardine, was Governor-General of Canada from 1847 to 1854, and both Bruce County and the town of Kincardine are named in his honor. Kincardine was first known by the Indian name of Penetangore meaning the river with the sand on one side, but the use of Kincardine, which better suited the English tongue, gradually supplanted the original name. The first settlers arrived in Kincardine in 1848, and in 1855 the government allocated £3,500 for harbour improvements, as the place was destined soon to be of some importance, from its situation at the head of an established road leading into the heart of a large tract of excellent farming country, for the exports of which it would be the outlet. In 1856, parallel piers were constructed to straighten the last several meters of the serpentine Penetangore River and control its outflow into Lake Huron. During the subsequent decade, a basin near the mouth of the river was dredged, and the two piers were extended. The government established a light near the end of the north pier in 1874 that consisted of square wooden building standing on an open-frame, seven-foot-tall base. Ross Robertson was appointed keeper of the fixed red light on April 30, 1874, but he passed away seven months later, and William Kay was placed in charge of the light.

The need for a harbour and lighthouse at Kincardine was driven by two main industries. By 1866, a fleet of six fishing boats was sailing from the harbour each morning to set their nets out in Lake Huron, and large deposits of salt at a depth of one thousand feet had been discovered at Kincardine in 1868. Wells were sunk to bring a briny solution to the surface, and various means were then used to either boil or evaporate off the water leaving the valuable salt crystals. In 1875, two salt companies produced 187,000 barrels of salt, a good portion of which was exported to the United States.

In 1877, Darius Smith, Superintendent of Lights above Montreal, visited Kincardine and made the following report on the pierhead light and its companion range light that had recently been erected.

Supplied this Station on 23rd July, at 6 p.m. It is a white wooden trellis work building, 30 feet high from the wharf to deck of lantern. The lantern is of wood and has five mammoth flat-wick lamps with 18-inch reflectors, and shows a fixed red catoptric light. The lantern is six feet four inches in diameter; size of glass, 30 x 36 inches; size of ruby glass, 19x19 inches.

The range light is a very slight building, the foundation of which is very rotten and the wharf on which it stands is in a very bad condition. The lantern used in this range light has to be carried by hand from the outer lighthouse, which I would recommend should be remedied and a new building put up.

The lights are well kept.

Parliament appropriated $4,000 in 1878 for a new inner range light, and a contract for its erection was awarded to Joseph White. When White failed to complete the lighthouse within the specified time, the contract was annulled, as much of the work was unsatisfactory, and the project was turned over to the local inspector, who finished the work in time for the lighthouse to commence operation in 1881.

This new Kincardine Lighthouse, which remains standing, consists of an octagonal, sixty-three-foot tower, having a vertical row of windows facing each of the cardinal directions and being perched atop a two-story keepers dwelling. Besides serving as the rear range light for entering the harbour, the new lighthouse also functioned as a lake coast light, displaying a fixed white light varied by red flashes every fifteen seconds. In 1910, a fourth-order Fresnel lens, which was illuminated by an incandescent oil vapour lamp and produced a white flash every twenty seconds, replaced the original catoptric light.

Keeper William Kay wrote a letter to his superiors in 1885 offering to terrace and sod the grounds of the station, and plant a few trees, until it would look like an oasis in this desert of sand; and somewhat more becoming the fine house. In the same letter, Kay requested a fence to prevent his wood from being stolen and the laundry from getting dirty from boys running under the clothesline. To save expenses, Kay was asked if he couldnt find time to build the fence himself. Perhaps a bit offended by the question, Kay responded, That is impossible, and in the summer, I cant see where any light keeper could find time to build a fence, I have to sleep half the day  if it can be called a sleep when there is such a racket on the wharf and at the fish shanties every day  and then it takes the most of the afternoon to do my cleaning and get ready for the evening, some days I have an hour or two to spare, but to go and work hard out doors would be a very bad preparation for my long watch at night, it would be different if one had an assistance to take half the night watch, but as it is, I do not see my way clear to build a fence.

Thomas McGaw replaced William Kay as keeper in 1899, and three years later he was involved in the rescue of the crew of the schooner Anna Maria, whose remains can still be seen along the shore at Kincardine. Loaded with coal for the Kincardine waterworks, the Anna Maria was nearing the harbour on the stormy night of October 7, 1902, when the piers were buried in the foam of a westerly gale. About ten p.m. faint cries were heard from the harbour, and those who investigated were amazed to discover the Anna Maria aground near the south pier with seas breaking over her.

Keeper Tom McGaws father, known as Big Tom, rounded up three of his cousins and launched a boat to rescue the crew. The men reached the stranded vessel and took the crew of six aboard, but their fishing boat soon swamped, spilling its occupants into the raging water. Three of the rescuers and two of the crew managed to make their way back to the Anna Maria, but Captain Gordon, a female cook, two other crewmembers, and one of the rescuers drowned.

Keeper McGaw rounded up a yawl boat and with three other men managed to reach the Anna Maria and bring the five men stranded there ashore. Those taking part in the rescue received a gold life-saving medal from the President of the United States and a bronze medal from the Royal Canadian Humane Society.

On July 9, 1902, the front range lighthouse on the north pier was struck by lightning and burned down. Keeper Thomas McGaw displayed a fixed red light from a lantern hoisted atop a twenty-eight-foot pole as a temporary measure until a new front lighthouse was placed in operation in May 1903. Situated 1,200 feet from the inner light, the new outer light consisted of a thirty-three-foot, steel, skeletal frame, square in plan, with sloping sides, painted brown, surmounted by a white, octagonal, wooden lantern. A seventh-order lens was used to produce a fixed red light.

On May 1, 1903, a steam fog siren, established in connection with the towns waterworks machinery, was placed in operation. The siren was mounted atop the white-brick waterworks building, situated on the shore north of the harbour entrance, and it emitted a two-and-a-half-second blast every forty-five seconds when needed. In 1931, an electrically driven fog alarm was established at the front range, and one remains in operation there today.

The range lights were electrified in 1925, and today, the main light can be aligned with a sector light at the end of the north pier to guide sailors into the harbor.

The job of keeper was discontinued in 1977, and in 1980 the lighthouse was leased to the Kincardine Yacht Club, which uses the dwelling for a clubhouse and a small museum that is open to the public.

On summer evenings, a bagpiper can be seen atop Kincardine Lighthouse at dusk piping while the sun sets. This pageantry is in honor of the towns Scottish heritage and to keep alive the Legend of Donald Sinclair. The story goes that in 1856 on a cold October day, a small ship left the Port of Goderich bound for Kincardine with Donald Sinclair and his immigrant Scottish family aboard. As the ship approached Point Clark, the sky turned black and a strong breeze started to blow out of the west, churning up the waters of Lake Huron. Late afternoon turned to dusk as the vessel slowly made its way north along the shore, and the captain began to fear that he would not make Kincardine before nightfall.

Concerned for his family, Donald Sinclair retired to the ships hold, prayed for safe passage, and then retrieved his bagpipes and started to play a lament. The heavy drone of the pipes along with their sharp melody drifted across the waters to Kincardine and prompted a fellow Scotsman to join in the lament. Hearing the second piper, the captain was certain he was nearing Kincardine and was able to safely follow the sound into the harbour. For many years after his familys safe voyage, Donald Sinclair could be found at dusk at the harbour, where he would be piping down the sun in honor of the Phantom Piper who had saved his family.

In December 2008, Kincardine Lighthouse was designated a Heritage Building by the town council. This move was partly prompted by the outcry that occurred earlier in the year when vinyl siding and modern windows were added to the historic lighthouse.

For a larger map of Kincardine Lighthouse, click the lighthouse in the above map.

From Highway 21 in Kincardine, turn towards Lake Huron on Durham Street. After 1.8 km (1.1 miles), turn left on Huron Terrace, and the lighthouse will be on your right after two blocks. The six-room keeper's house attached to the tower is now home to the Kincardine Yacht Club's clubhouse and a marine museum, which is open to the public during the summer. The lighthouse is open from 11 a.m. to 5 p.m., July 1st through Labour Day.

The lighthouse is owned by the Town of Kincardine and managed by Kincardine Yacht Club. Grounds open, tower open in season.


Each night during the summer a Phantom Piper pipes down the sun. Click here to see a video taken in July 2014.