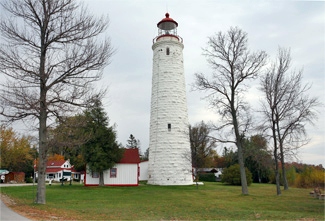 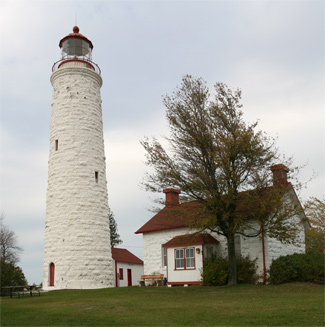 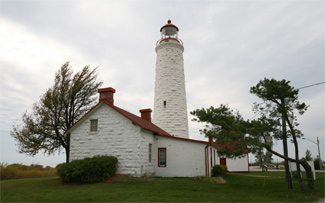 As construction of St. Marys Falls Ship Canal at Sault Ste. Marie was nearing completion, authorities anticipated a marked increase in vessel traffic on Lake Huron, since ships would now have easy access to the natural resources surrounding Lake Superior. To assist mariners transiting Lake Huron and calling at key ports on Georgian Bay, the Province of Canada authorized the construction of six major lighthouses, known now as the Imperial towers. First lit on April 1, 1859, Point Clark Lighthouse is one of the six Imperial towers built between 1855 and 1859 under the direction of John Brown, a contractor from Thorold. The eighty-seven-foot tower was constructed of limestone quarried in nearby Inverhuron and warns mariners of an offshore shoal and a dangerous reef that extends from the point.

The cut stone for the dwelling and tower were prepared in 1856, and by the end of 1857, the tower had nearly reached its full height and the walls of the dwelling were two feet above the basement course. Work on the tower and dwelling was completed in 1858, allowing the light to be exhibited at the opening of navigation the following spring. Completion of the Imperial towers was much delayed as Brown lost two steamers, a schooner, and two scows during the work along with much timber and supplies.

The walls of the lighthouse taper from a thickness of five feet at the base to two feet at the lantern room, where a revolving, second-order Fresnel lens, imported from France, was installed. Granite was used for the upper courses instead of limestone in order to support the massive, twelve-sided lantern room. Point Clarks flashing light made it readily distinguishable from the fixed lights at Goderich to the south and Chantry Island to the north.

The stone tower was apparently not the first navigational aid on Point Clark. Before being named Point Clark, after settlers from Clark Township near Toronto settled in the area, the point was known as Pine Point, reportedly because a lantern was hung from the limb of a pine tree there to help mariners along their way.

John Young was hired as the first keeper of Point Clark Lighthouse at the age of fifty-five, and he cared for the light until he turned seventy-eight in 1882. For an annual salary of $435, Keeper Young was required to keep the towers lamp burning brightly during the night and to wind up the weights that powered the clockwork mechanism for turning the lens. The towers lamp initially burned spermaceti oil, but colza oil was introduced in 1860 as it was less expensive and remained limpid at lower temperatures.

Keeper Young was placed on pension at the end of 1882, and David Small was appointed in his stead. The life of a keeper must not have been to Smalls liking as he soon resigned, and John Rae was appointed keeper on June 4, 1883. Charges of drunkenness were brought against Keeper Rae in 1891, and the collector of customs at Kincardine was appointed to investigate the matter. These charges were deemed false at the time, but perhaps there was some truth to them, as on November 27, 1896, Keeper Rae was dismissed after it was established that owing to drinking habits he had not given proper attention to the care of the light.

Point Clark Lighthouse was automated after the 1924 shipping season, eliminating the need for Keeper George Ray, who had been in charge of the light for a decade. However, mariners soon complained about the quality and reliability of the light, and John Ruttle was hired as keeper in July 1926.

In July 1933, a canary flew into a home in South Buffalo, New York. Somehow, John E. Ruttle, the keeper at Point Clark Lighthouse at the time, learned of this and wrote to the police in South Buffalo claiming the bird was his. The newspaper account of the incident, entitled Man 250 Miles Away Says Canary Is His, did not say whether the bird was returned to the keeper.

John C. Campell, the last official keeper of the light, served from 1947 until the light was finally automated in 1962. Marlene and Elmer MacKenzie were paid a small sum to live in the dwelling as caretakers from 1963 to 1964, and Elden Lowry served in this capacity from 1964 to 1967.

In 1966, the lighthouse was declared a national historic site, a first for an Ontario lighthouse, and the following year it was acquired by Parks Canada as a monument to the vital role lighthouses played in the navigation of the Great Lakes. As part of the transfer agreement, the Canadian Coast Guard remained responsible for the light in the tower.

Parks Canada signed an agreement with Huron Township in 1987 that allowed the community to set up a museum in the keepers dwelling. Gwen Harrison was hired and given a budget of $50,000 to establish the museum, and the site was opened to the public on June 18, 1988. Deteriorated stone on the face of the tower was determined to be a safety hazard in 2010, forcing the closure of the lighthouse.

In 2011, a $622,000 contract was awarded for the restoration of Point Clark Lighthouse National Historic Site. On announcing the action, Peter Kent, Canadas Environment Minister and Minister responsible for Parks Canada, said Last year, Parks Canada developed a plan to restore the Point Clark Lighthouse and reopen it to visitors. Today I am pleased to announce that the Government of Canada is contributing to preservation of this regional icon of marine heritage.

The work, which was to include complete repair and refinishing of the towers stone exterior, repairs and repainting of the glazed lantern and metal roof, and some interior and below-ground repairs, was contracted to Heritage Restoration Inc. of Uxbridge, Ontario. Once restoration worked started and the exterior surface treatment was sandblasted away, it was discovered that the tower had four significant cracks, not just the one known vertical crack. In addition, after the joints of the tower were raked in preparation for rejointing, it was found that the original mortar behind a two-inch-thick modern layer had no supporting strength. Given these unexpected issues, work on the tower stopped, as moisture had penetrated the rubblestone core of the tower through the top eight courses of stones, prompting the contractors engineer to recommend the removal of the lantern room so more effective repairs could be made.

On September 10, 2013, the government announced that a contract of up to $1.7 million had been awarded to Toronto-based Limen Group Construction Limited to complete the restoration. Work on the tower was wrapped up during the summer of 2014, and the museum and lighthouse re-opened to the public in June 2015.

For a larger map of Point Clark Lighthouse, click the lighthouse in the above map.

From Highway 21 between Goderich and Kincardine, turn west onto Concession 2. Follow the road towards the lake for 4.2 km (2.6 miles), and then turn left onto Huron Road. Take your sixth right, Lighthouse Road, to reach Point Clark Lighthouse. A museum located in the keeper's dwelling, and the tower are open from late June through Labour Day. For more information call (519) 395-2494.

The lighthouse is owned by Parks Canada and managed by the township of Huron-Kinloss. Grounds open, tower open in season.