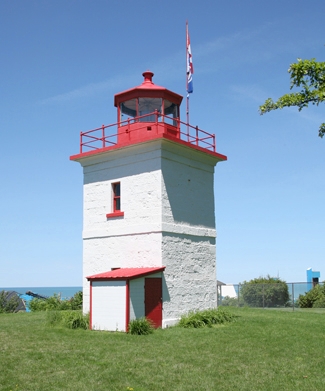 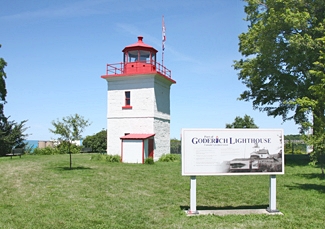 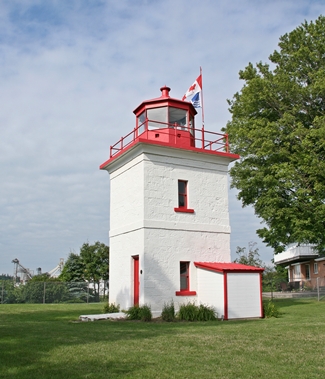 The harbour at Goderich was originally just the mouth of the Menesetung (Maitland) River, but in the 1830s, the Canada Company constructed two stone-filled wooden piers to provide protection for the anchorage. Goderich is the oldest Canadian light station on Lake Huron and first consisted of a pair of range lights established in the early 1830s. A contract for the erection of the current lighthouse was entered into in 1845 and called for the tower to be completed by July 1, 1846. Thomas Mercer Jones, a powerful land magnate with the Canada Company, sold the needed parcel of land overlooking the harbour to Queen Victoria.

Adam MacVicar, a stone mason born in Edinburgh Scotland, worked on the construction of the Welland Canal after immigrating to Canada in the early 1800s. When that work was done, he relocated to Goderich and helped build the lighthouse in 1846. The square tower was constructed of evenly-coursed stone and features string courses between the first and second storey and just below the gallery. Though the tower stands just twenty feet tall to its lantern room, its light has a focal plane of 150 feet above Lake Huron. In November 1846, severe gales did considerable injury to the lantern. Some immediate repairs were made, and additional work was done when the lighting apparatus was placed in the lighthouse in 1847.

Hamilton Killay, a civil engineer, visited Goderich in 1847 to examine the state of its harbour on his return from surveying the Sault Ste. Marie. With the exception of the Piers and Light-house constructed at Goderich, the entire extent of this coast is without a light, a harbor or shelter of any description, Killaly reported. The country backing the coast presents a tract of land, which, for extent, richness of soil, and capability for improvement, is not surpassed by any in the Province. Killaly recommended that the piers in the harbour be repaired and extended, and that pier lights be erected. As for the new lighthouse, which he found to be well positioned, Killaly noted the following defects. A heavy gale in November last, from the south west, affected the projecting cornice of the roof of the house so much as to render it necessary to have it at once attended to. The glass of the lanthorn is much too light, heavy crown glass should be substituted for it; five of its sides had been glazed, but in consequence of broken glass, but three were lighted when I was there, the remainder having been boarded up. In its then state the light showed sufficiently to the northward, but as it only shewed to about S. S. W. one more range of panes on the south side should be glazed.

In 1872, the government solicited bids for the construction of a work to protect the bottom of the bank on which lighthouse stood from being eroded by wave action. The contract was awarded to a Brantford firm, which completed the project during the summer of 1873 at a cost of $3,850.

By 1867, two lights had been established on the north pier. Responsibility for these lights was transferred from the Department of Public Works to the Department of Marine in 1875, and George N. McDonald, keeper of the main light, was paid an extra $100 each year to look after the pier lights. An elevated walkway was added to the north pier in 1878 to help the keeper reach the piers lights in stormy weather.

Five panes of French plate glass, 61 1/2 by 37 inches and three-eighths of an inch thick, were installed in the lantern room of Goderich Lighthouse in 1883. The light source was also upgraded at that time to ten mammoth flat-wick burners. According to the Huron Signal, Keeper McDonald was exceedingly pleased with the improvements to the lighthouse. The lighthouse was further improved in 1908 through the installation of a fourth-order French lens that replaced the previous catoptric apparatus.

An arrangement was made with the municipal authorities of Goderich to establish a steam fog whistle in the towns waterworks building situated on the beach just south of the piers. This eight-inch whistle was placed in operation on November 10, 1888 and gave a ten-second blast each minute.

Work on the harbours outer breakwaters began in 1904 and necessitated the erection of a new back light, 254 feet north of the north pier, to form a proper range for avoiding these offshore obstructions. This light was initially just a lantern hoisted atop a mast, but in 1908, a three-section, skeletal, steel tower, which had a height of sixty-four feet, was erected in its place. In 1909, a reinforced concrete, gas-lighted beacon, with a height of fifteen feet, was established on the western end of the north breakwater.

In November 1913, two major storm fronts converged on the Great Lakes and created the deadliest and most destructive natural disaster to strike the region. Hurricane force winds whipped up thirty-five-foot-tall waves on Lake Huron that claimed eight freighters and their crew totaling nearly 200. One of the ships lost was the Wexford, which went down off Goderich with a load of grain. After bodies wearing life jackets from the Wexford washed ashore at Goderich, an inquest was held to determine if more couldnt have been done to help the ships in distress.

One of the points made at the inquest was that no one felt any particular responsibility in the matter of blowing the foghornand on foggy or stormy days it was blown whenever anyone happened to think about it. J.B. Kelly, chief engineer at the municipal power house, testified that the foghorn started to blow about 11 p.m. on February 9, but by that time, it was probably too late for the Wexford which was blinded by snowsqualls. The vessels whistle was apparently heard at Goderich, but nobody actually sighted the vessel. To help prevent similar tragedies, an electric compressed-air diaphone fog alarm was established at the western end of the northern breakwater in 1914. The lifesaving station on the south pier was responsible for operating the fog alarm, and the fog whistle atop the waterworks building was discontinued. The wreck of the Wexford was finally located in 2000.

As a result of the perceived inadequacy of the lights at Goderich during the Big Blow of 1913, the light atop the hill was heightened five feet in 1914. The lighthouse received a new lantern room, a double-flash long-focus reflector, and a concrete deck, to replace the old stone deck. The keepers dwelling that was attached to the square tower was sold off and relocated to a private parcel just northeast of the tower, where it served as part of Craigie Cottages. The keepers dwelling was torn down in 1985, after having been purchased by a new owner in 1980.

In a legal transaction, dated August 29, 2003, Her Majesty Queen Elizabeth II sold the lighthouse and the surrounding land to the Town of Goderich for the sum of one dollar. In 2009, local marine enthusiasts and the Marine Heritage Committee approached the Town of Goderich about restoring the lighthouses exterior to its original condition. After extensive research, the tower was stripped of its paint, had its mortar replaced with period mortar, received a new door and windows, and was repainted with three coats of Thoroseal. Interactive signage designed by Goderich Marine Heritage was installed at the site, and after new gardens were planted, a grand public opening was held in June 2010.

For a larger map of Goderich Lighthouse, click the lighthouse in the above map.

From Highway 41, turn west towards Lake Huron on Elgin Avenue. After four blocks turn right on Wellesley Street, and then after two blocks turn left onto Lighthouse Street. Goderich Lighthouse is located at the end of the street.

The lighthouse is owned and maintained by the Town of Goderich. Grounds open, tower closed.


During a trip to Ontario in 2014, I visited Goderich, Canada's Prettiest Town, and Kagawong, Ontario's Prettiest Village. It is always interesting to see how a community brands itself, and in the case of Goderich, I think their title has some merit. The town's unique octagonal town square, imposing county courthouse, stone town hall, former jail, and beautiful homes and churches are worth an extended driving tour.