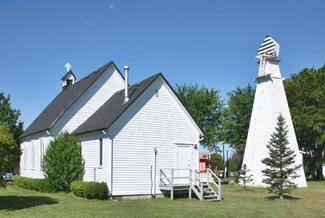 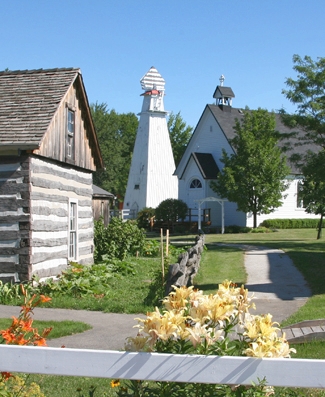 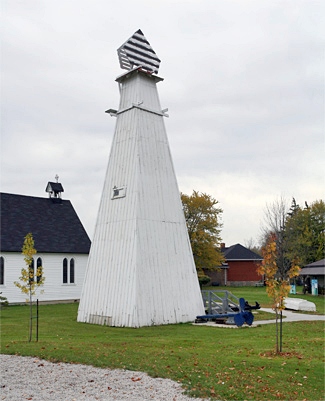 In 1889, the Department of Marine noted that tenders had been invited for erecting a pair of range lights at Corunna to help guide mariners past the head of Stag Island in the St. Clair River, and the next year, the following report on the completion of the lights was published by the Department:

The range light buildings at Corunna, on the St. Clair River, to which allusion was made in last years report, were satisfactorily completed under contract by Messrs. Sutherland & Purser, of Sarnia, whose contract price was $339, and the lights were put in operation on the 10th May last. The towers are skeleton-framed square wooden buildings, with the side facing the line of range in each slatted to make them more conspicuous day marks. Each tower is 40 feet high from the ground to the roof, is painted white, and shows a fixed white or bright light from a reflector lantern hoisted to within 2 feet of the top. The light should be visible 4 miles in and over a small arc on each side of the line of range.

The two lights in range indicate the best water in the Canadian channel, past the shoals at the head of Stag Island on the west, and past the shoals at the mouth of Talfords Creek, on the east side. This range has given great satisfaction during the past season to all vessels, and has rendered possible the discontinuance of a lightship maintained by subscription among vessel owners in American waters on the point of the shoal at the head of Stag Island.

During the spring of 1892, the open frame towers were enclosed by James Adair, a carpenter from Courtright, at a cost of $205 to facilitate the exhibition of a more efficient light. The improved back range tower burned down on June 15, 1892, and Adair was hired to build a new one for $205. This new enclosed tower, which was square in plan and stood forty-two feet high, was to be finished by the end of November 1892, and in the meantime a temporary light was shown from a lantern hoisted to the top of a pole.

James W. Maguire was the first keeper of the range lights and looked after them for just over a decade until William Scott, Sr. was hired in 1901. William Scott, Sr. was followed by his son William Scott Jr., who held the position until he turned eighty in 1948. The keepers were required to light the kerosene lamps at dusk and extinguish them at daybreak. Besides this, they also cleaned the lamps chimneys and kept a detailed record of their work.

A U.S. survey party noted in the fall of 1912 that due to cross currents the channel indicated by the Corunna Range was too close to the shoal bank along Stag Island. This information was communicated to Canadian authorities, and the following year, the front range light was moved just over seventeen feet to the east in order to give the shoals off the head of Stag Island a wider berth. In its new position, the light was 568 feet from the rear light along the line of 347 degrees. In 1914, the front light was improved by replacing its catoptric illuminating apparatus with a fifth-order Fresnel lens. The color of the light exhibited by the range towers was changed from white to red in 1926.

In September 1941, the original front range light became the rear range light (without being moved), and a new front light, a metal pole with a white diamond daymark, was established in the river, 230 feet to seaward along the range line. Nearby residents of Corunna did not want to see the discontinued rear tower torn down so several of them pooled their money and came up with seventy-five dollars to purchase the structure. Those families contributing to purchase the rear tower included the Cruickshanks, Browns, Bairds, and Youngs. The Coast Guard was not satisfied with the new front light in the river, so in 1951 they bought back the old tower. After the tower was extended by about six feet and its foundation repaired, it resumed its role as a rear range light. In 1953, the lights were electrified.

When trees on nearby properties prevented a clear view of the rear tower from the river, the Coast Guard decided to replace the old tower with a fifteen-meter (fifty-foot) steel tower and offered the old tower to any takers. The Moore Museum decided that the lighthouse, which is crowned by a diamond-shaped daymark, would fit in well with their collection of historic buildings and asked that the funds the Coast Guard had allocated for tearing down the structure be used in relocating it. The Coast Guard agreed and installed the new foundation on the museum grounds.

On August 5, 1982, the lighthouse was lifted by crane onto a flatbed trailer and then transported just over five kilometers along the St. Clair Parkway to the grounds of the Moore Museum in Mooretown, where its historic neighbors include a log cabin, a church, a one-room school house, a railroad station, and a fire hall. The crane and required manpower were donated by Sarnia Cranes Ltd. in honor of the companys late founder, Duffy Atkin, Jr., whose widow and family members were on hand to watch the move. Duffy Atkin had contributed to many community projects in Lambton County before his passing in 1980 at the age of fifty-two due to a cerebral hemorrhage. Moving the lighthouse to its retirement home required a coordinated effort. Bell Canada and Ontario Hydro were present to ensure the tower passed safely under transmission lines; C&O Railroad supervised the passage of the lighthouse over railroad tracks; and Sombra Ontario Provincial Police provided a police escort. During the summer of 1983, rotting boards in the tower were replaced, loose boards secured, and the lighthouse received a fresh coat of paint.

The 1890 front range tower remained in operation for a few more years, but when the Coast Guard decided to replace it by a modern tower, no new owner for the decayed but historic tower could be found, and it was demolished.

The modern Corunna Range Lights were discontinued in 2004 due to advancements like the satellite-based Global Positioning System, which made the lights obsolete.

For a larger map of Corunna Range Rear Lighthouse, click the lighthouse in the above map.

From the St. Clair Parkway (County Road 33), which parallels Detroit River, turn east onto William Street in Mooretown and continue three blocks where you will find Moore Museum on your left.