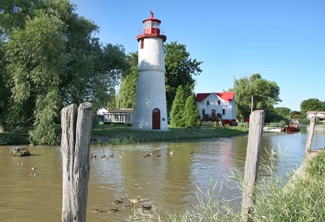 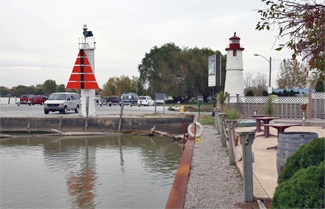 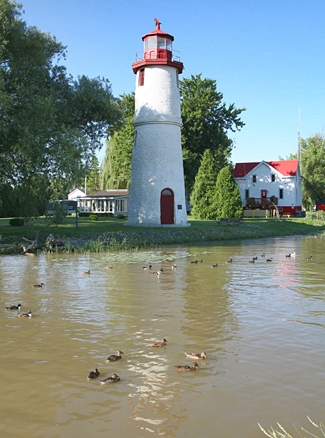 In 1793, John Graves Simcoe, the first Lieutenant Governor of Upper Canada, named the River Thames after the river that flows through London in his home country. With a length of 273 kilometres, the River Thames today drains the agricultural heartland of southwestern Ontario into Lake St. Clair.

In November 1836, the petition of Alexander Chewett and seventy-three other inhabitants of the Western District, praying for the erection of a Light House at the mouth of the River Thames, was read before the Provincial Parliament of Upper Canada, who the following March granted £1,000 for a lighthouse to mark the river, and another £1,000 for lighthouses at Port Colborne and Port Burwell on Lake Erie and £1,500 for lighthouses at Oakville and Presque Isle on Lake Ontario.

The history of Thames River Lighthouse is tightly coupled with the Cartier family, who are reportedly relatives of the famed explorer Jacques Cartier. Claude Cartier, who learned the trade of a tailor during his youth in Quebec, fought in the War of 1812, and then settled near Simcoe, after having spent a couple months in Ohio. In 1830, Cartier moved farther west to the small, undeveloped village of Chatham along the Thames River, and the following year he opened the Chatham Hotel, a log tavern that was known for its inexpensive meals, three-cent shots of corn whiskey, and splendid New Years Eve balls.

As a leg injury he suffered during the War of 1812 made it increasingly difficult to run his business, Cartier petitioned the government in 1837 for the appointment of keeper of the lighthouse then under construction at the mouth of the Thames. Claude Cartier served as keeper of the light from 1838 until his death in 1855, and during this period a square, wooden tower was erected in 1845 to serve as the front range to the thirty-foot-tall, cylindrical, stone tower, that was built in 1837.

Claude and Nancy Cartier had twelve children, and one of these, Thomas, took charge of the light upon his fathers passing. The Chatham Planet of February 1870 credited Keeper Thomas Cartier with saving eleven lives during the previous twelve years. The article began, We have frequently, in these columns, been called upon to record the brave, humane, and self-sacrificing efforts put forth by Mr. Thomas Cartier, keeper of the River Thames lighthouse, in the way of lending aid  personal and pecuniary  to sailors and others in distress on Lake St. Clair. A detailed account of each of the rescues was then given, including the following:

In April, 1868, assisted by a younger brother, Mr. Cartier, at the imminent risk of both their lives, put out into the lake in a small sail boat, in a very wild storm, and rescued Capt. Charles Parker and a crew of four men from the scow China, which had become unmanageable and filled with water. Fortunately, the scow had reached the shallow water and the breakers, some two miles from the shore, and the Cartiers succeeded in taking the men safe into their boat, not, however, until the entire deck load had been swept overboard, the men, when picked up, being upon the floating cordwood.

The local paper wasnt alone in recognizing Keeper Cartiers efforts. In 1872, the Canadian Government presented him an inscribed gold watch for having saved thirteen lives, and in 1876, the Department of Marine awarded him $50 for aiding vessels caught in Lake St. Clair.

An 1878 inspection of the station noted that Keeper Cartier had eight children and provided the following description of the lights: [The main light] is a white stone circular tower 30 feet in height from base to vane, with a lantern of iron 7 feet 6 inches in diameter, containing five base-burner lamps, with three 16-inch and two 14-inch reflectors, showing a white fixed light: size of glass 30 x 36 inches. There is also a range light, showing a white fixed light of the catoptric order; it stands on a pier; the lantern is of iron, 6 feet 6 inches in diameter, and has one No. 1 base-burner lamp, with 14-inch reflector; it is in very good order.

At some point after this, a brick extension was added to the stone tower, raising it to its current height of fifty-five feet. The extension can be easily detected by the stone ring partway up the tower. In 1897, a seventh-order lens replaced the lamps and reflectors used in the main light, providing a considerable savings of oil while producing a more brilliant light. A fifth-order lens was installed in the main lantern room in 1909, and in 1914, a sixth-order lens replaced the catoptric apparatus used in the front range light.

After Thomas Cartier passed away in 1880, his wife Emma cared for the lights for four years until Henry Joseph Cartier, her son, was appointed the official keeper. In 1903, Henry Cartier was awarded $250 for the loss of provision and money he suffered when the keepers dwelling was destroyed by fire that April. A temporary dwelling, as seen in this May 1903 photograph, was hastily erected for Keeper Cartier and his family.

The Cartier family cared for the lighthouse for over 110 years until William Dick Cartier, the brother of Henry Joseph, passed away in 1950. The Lower Thames Valley Conservation Authority obtained the lighthouse on November 6, 1972, through a grant from Her Majesty Queen Elizabeth II, and restored the structure in 1973, rebuilding it stone by stone in the process. The navigational lights in the range lights resumed operation in 1974. A plaque near the lighthouse honors James L. Cooke, a member of the Conservation Authority, who lead the restoration of the tower and light.

The lighthouse now stands in the one-hectare Lighthouse Conservation Area, which is controlled by the Conservation Authority. In 2021, a cylindrical mast near the boat landing at the entrance to Thames River was displaying a flashing red light, and the old lighthouse was no longer active.

For a larger map of Thames River Range Rear Lighthouse, click the lighthouse in the above map.