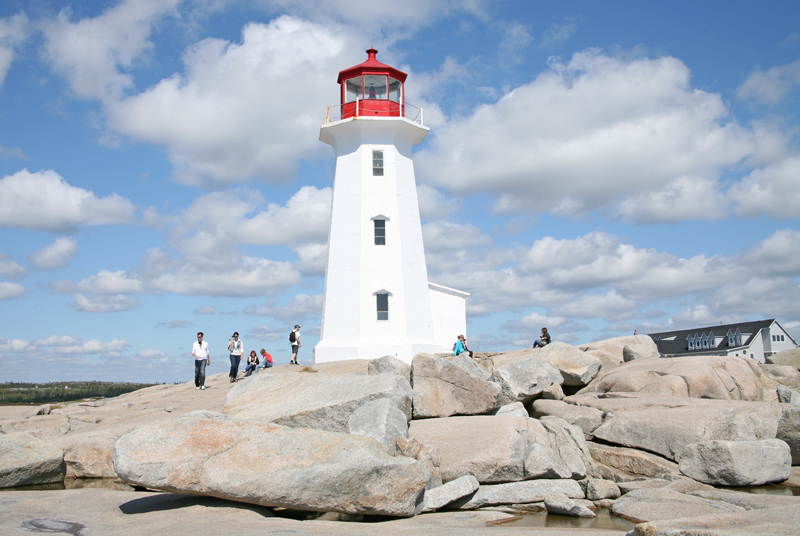 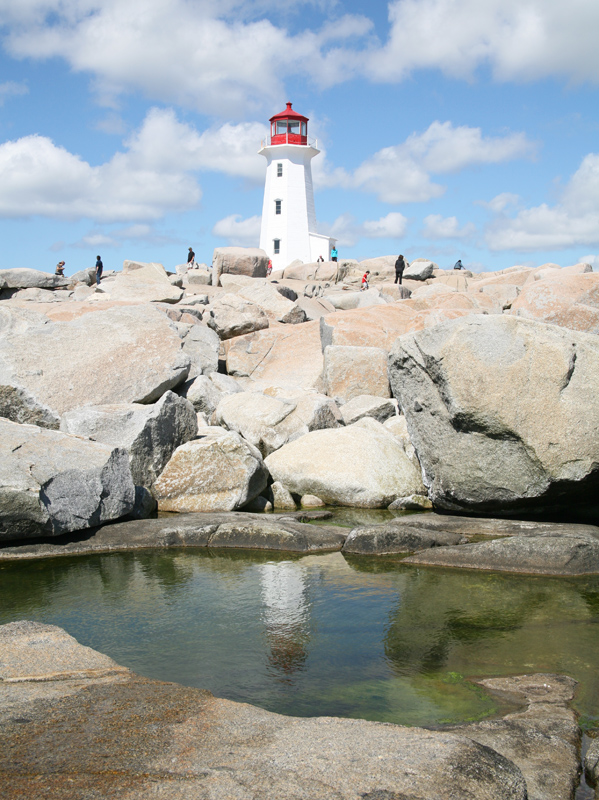 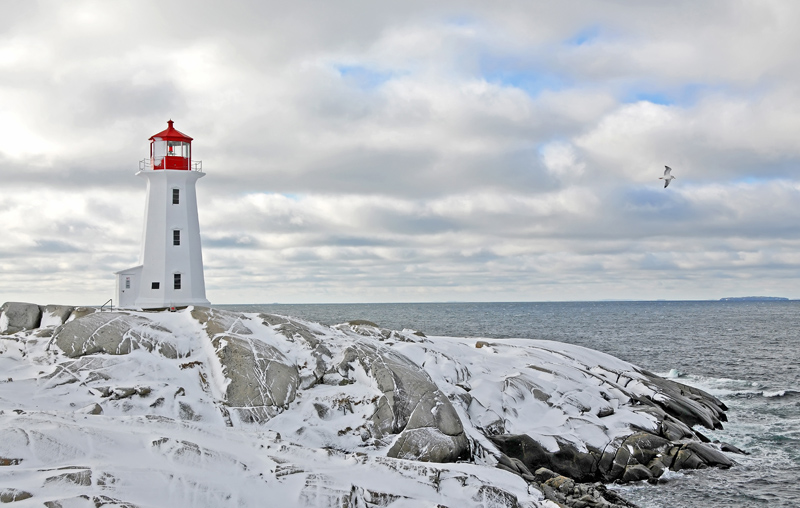 St. Margarets Bay is bounded by the Chebucto Peninsula to the east, the Aspotogan Peninsula to the west, and the Atlantic Ocean to the south. Peggys Point marks the eastern side of the entrance to St. Margarets Bay, and just inside Peggys Point is the tiny inlet known as Peggys Cove. Peggys Cove and Point were most likely named after St. Margarets Bay, as Peggy is a nickname for Margaret, but there are also some more fanciful explanations for its name. One story claims Peggy was the sole survivor of a shipwreck in the area. After she married a resident of the cove around 1800, she became known as Peggy of the Cove. Visitors would come from afar to meet her, and the village situated around the cove eventually became known as Peggys Cove.

In 1860, a petition from George Garrison, Sr. and other inhabitants of St. Margarets Bay, praying for the establishment of a beacon light at the east point of the bay, was read in the House of Assembly of Nova Scotia. No immediate action was taken on the request, but the Board of Works finally did award a $1,690 contract on June 20, 1867 to Murphy and Lawlor to build a lighthouse on Peggys Point. While many refer to the lighthouse on Peggys Point as Peggys Cove Lighthouse, it has always been called Peggys Point Lighthouse in government records and that is the name it still has today on the official List of Lights published by the Canadian Coast Guard. There actually is a Peggys Cove Light, but it is located 250 metres northeast of Peggys Point Lighthouse on a wharf inside Peggys Cove, where it helps guide fishermen into the protected harbour.

The first Peggys Point Lighthouse consisted of a twenty-six-foot-square, one-and-a-half-storey dwelling with a lantern perched atop its roof. Edward Horne was hired as the first keeper of the lighthouse at an annual of $350. In 1872, the upper part of the wooden lighthouse was finished to created two bedrooms for the use of the keeper and his family, along with a storeroom.

The following description of the lighthouse appears in the Annual Report of the Department of Marine for 1874:

Iron lantern 7 ½ feet in diameter, 8 ½ feet high, and having twelve sides, glazed with plate glass 42 x 24 inches. Three spare panes are on hand at the station. The light, which is dark on the North side, is shown from six A flat-wick lamps, with 12-inch reflectors, and the keeper has four iron tanks in good order and repair. The dwelling and light-house are in the same building, besides which there is a store for oil, &c., 18 x 20 feet. The premises are in good order; the buildings were painted in 1872. A boat 18 feet long is furnished by the Government, which the keeper states is in bad repair, and should be replaced by a new one.

One hundred and seventy gallons of oil were consumed during the year ended 30th September last, and eighty gallons were delivered on 29th April, making, with what was on hand, 271 gallons at that date. The station and premises were inspected on that date.

In 1877, there were four wooden supports, one at each corner, to help hold the lighthouse in place. Still, Keeper Crooks complained that the lighthouse vibrated a good deal in strong winds.

During a heavy southeast gale on April 15, 1881, a heavy sea broke over Peggys Point, causing extensive damage to the lighthouse and its foundation and completely sweeping away the oil house with its contents. A new oil house was promptly constructed and extensive repairs made at a total cost of $545.

In 1887, an eight-sided, iron lantern room, formerly used at West Ironbound Island Lighthouse, replaced the old lantern room at Peggys Point that was unfit for further service. A new deck and base were built to receive the new lantern room.

Standard Construction Company of Halifax built the current thirty-foot-tall, concrete Peggys Point Lighthouse in 1915 under a contract for $2,456. A fourth-order lens and an eight-foot-lantern to place atop the new lighthouse ran another $1,945.92. The new lighthouse was constructed fifteen metres west of the original lighthouse and was placed in operation on August 1, 1915. The old lighthouse, minus its lantern room, was retained as the keepers residence.

Robert Manuel, who had been keeper and then caretaker of the light since 1934, announced in March 1958 that he was no longer interested in looking after the light. The lighthouse had been connected to commercial power since 1949, so a time switch was installed to control the beacon, and the light was made unwatched. Due to reliability issues with the power, York Manuel, son of Robert, was hired as caretaker on April 9, 1958, at an annual salary of $100, and he served until November 1966. The original lighthouse was torn down in 1954, after it had suffered extensive damage from Hurricane Edna.

From 1975 to 2009, Peggys Point Lighthouse took on another government function  that of a post office. During the summer months, Canada Post had an office in the tower where visitors could mail letters and postcards that would receive a special cancellation stamp featuring a silhouette of the lighthouse.

In early 2009, the Department of Fisheries and Oceans announced it didnt have funds to paint the lighthouse, but after public outcry, contractors were soon hired. The lighthouse was in need of paint again in 2012, and this time, the local painters union stepped forward to keep the local icon in its expected dazzling red-and-white coat. The union came to the rescue again in 2017.

In October 2021, a new accessible viewing platform opened near Peggy's Cove Lighthouse. The 1,300-square-metre deck, which cost $3.1 million and includes steel guardrails knitted together like fishing nets, was designed to improve access and discourage visitors from venturing onto the granite rocks during storms. Omar Gandhi designed the new platform, which has a cantilevered look-off.

Peggys Cove has a population of roughly fifty year-round residents, but on many sunny summer days, several hundred people can be found climbing on the granite rocks around the lighthouse, having a bite to eat next door at The SouWester, or just walking the streets of the picturesque village. Peggys Point Lighthouse is easily the most photographed lighthouse in Canada and has become a recognized landmark worldwide. There is no denying that Peggys Point Lighthouse makes for beautiful pictures and paintings, but some lighthouse purists wish that just a small portion of the attention it receives could be spread across the many other deserving lighthouse found in Nova Scotia and throughout Canada.

For a larger map of Peggys Point (Peggys Cove) Lighthouse, click the lighthouse in the above map.

From NS 333 (Lighthouse Route) at Peggy's Cove, turn off on Peggy's Point Road and continue to the turn-around at its end, where you will see Peggy's Point Lighthouse.


When visiting Peggy's Cove, I would recommend a stop at the memorial to Swissair Flight 111, which crashed just offshore in 1998. One monument, which affords a nice distant view of Peggy's Cove, is located roughly a kilometre northwest along the Lighthouse Route. A second monument is located near Bayswater on the Aspotogan Peninsula. The two land-based monuments and the crash site roughtly form an equilateral triangle. Unidentified remains of those aboard flight 111 are interred at the Bayswater site.