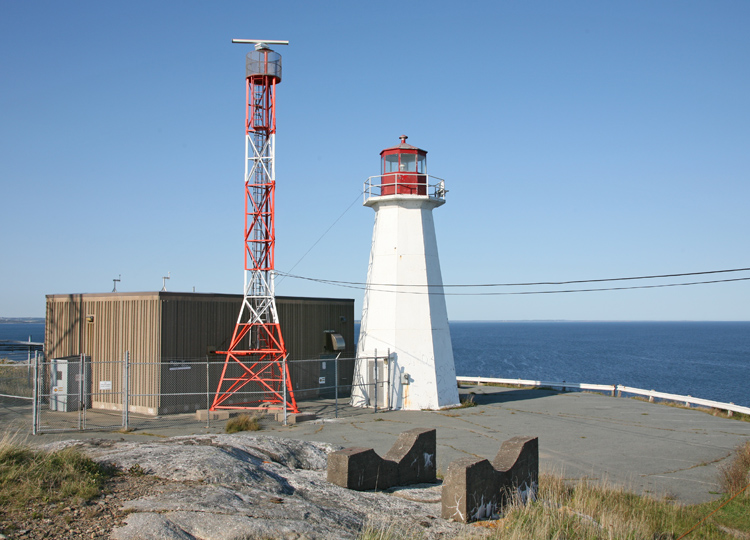 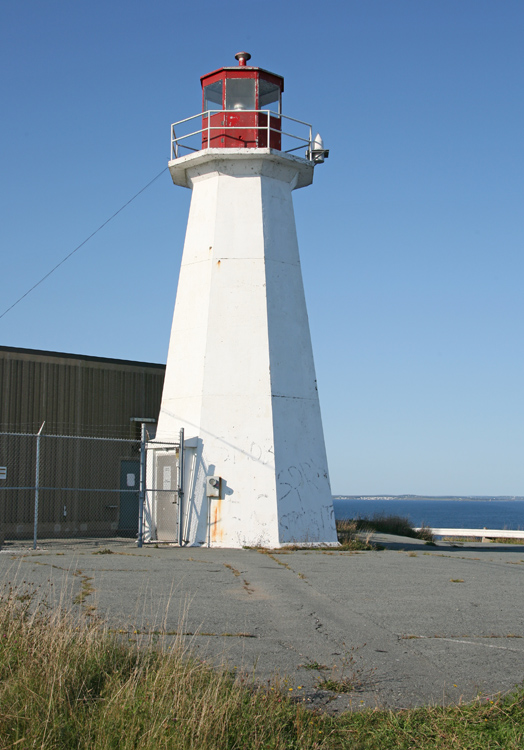 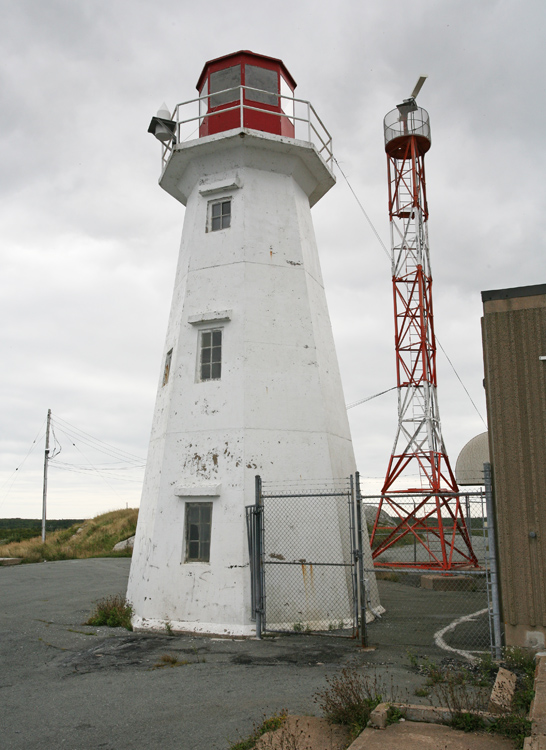 Chebucto Head rises to a height of just over thirty-two metres and defines the southwest side of the entrance to Halifax Harbour. The Mikmaq Nation called the headland Jipugtug, meaning the big harbour, and this name was anglicized to Chebucto. The Department of Marine noted the completion of the first lighthouse on Chebucto Head in its annual report for 1872:

Chebucto Head is a square wooden tower, 22 ½ feet high, painted white. It is situated at the western entrance to Halifax Harbour, and is a revolving white light, shewing a flash every minute and making a revolution every two minutes. The light was first shown on the 21st August, 1872. The contract for the building was awarded to Mr. Jacob Bowser for $2,375, and $1,435.69 has been expended on the illuminating apparatus. The brilliancy and power of this light have been very highly spoken of by masters of vessels entering this port. Mr. Edwin Johnson was appointed keeper at an annual salary of $400.

The dwelling for the keeper and his family was attached to the light tower. As it was perched atop a rocky cliff, with no protection from trees, the lighthouse was fully exposed to the elements and required frequent repairs to keep it weatherproof.

To provide access to the station, a considerable quantity of rock had to be blasted away to create a thirty-yard-long landing slip at the rocky shore and a one-hundred-and-fifty-yard-long road leading from the landing to the lighthouse. A capstan was installed to haul the stations boat from the water to a combination boat/store house. On August 24, 1873, a gale toppled the boathouses brick chimney, causing considerable damage to the roof.

The need for a road to link the station to a public road a half-mile away was noted early on, but due to the intervening rugged terrain, it was not finished until 1883. Before that time, a footpath had to be used to reach Duncans Cove, the nearest community.

In 1890, William P. Anderson, Engineer for the Department of Marine, and William H. Smith, Chairman of the Board of Examiners of Masters and Mates, were charged with recommending improvements to the aids to navigation for the approaches to Halifax Harbour. The pair studied the numerous petitions and suggestions that had been received and also made their own observations before recommending that the steam fog signal at Sambro Island be moved to Chebucto Head.

A study of the chart makes it readily apparent why the Sambro fog-whistle should not be efficient, the pair wrote. It is surrounded by rocks and shoals extending seaward in all directions for about two miles, and these shoals must cause so much unequal heating of the atmosphere that the air can rarely or ever be in the homogeneous condition necessary for the transmission of sound. Sambro is, from its surroundings, a station manifestly unsuitable for a steam fog-whistle site. Chebucto Head, on the other hand, stands out boldly into the channel, with good water close to, and a fog-alarm down near the waters edge, under the lighthouse, would, in our opinion, give uniformly good results, and also mark a very important point of departure for entering the harbour.

Dynamite was used to blast into the solid cliff at Chebucto Head to create a foundation for the redbrick fog alarm building and a reservoir, capable of collecting 117,000 gallons of water. A tramway also had to be constructed to transport coal from the landing to the fog alarm building. The whistle was placed in operation on June 1, 1892 and gave a ten-second blast each minute during periods of limited visibility. Shipmasters were pleased with the new fog alarm as it proved to be a great aid to vessels seeking an entrance to Halifax Harbour during thick or foggy weather.

In 1906, another type of fog signal was established at Chebucto Head: a submarine bell. A wooden control building was built on shore at Chebucto Head, and from this, cables were run to two tripods that were placed on the seafloor off the headland. Vessels equipped with a special listening device could determine the direction to the bell and thus get a better idea of their position.

In 1930, A.S. MacMillan of Halifax built a new concrete, octagonal lighthouse atop Chebucto Head along with two single dwelling under a contract for $16,900. This lighthouse didnt last too long as it was destroyed at the onset of World War II so a gun emplacement could be built. A square, white, two-storey dwelling whose hipped roof was topped by a red lantern room was built in 1940 at a cost of $16,940 to serve as the third Chebucto Head Lighthouse.

Edward and Catherine Gallagher moved into a dwelling on Chebucto head in 1929 after Edward was placed in charge of the lighthouse. According to her descendants, Catherine was very, very smart, earning a teaching certificate when she was just sixteen. As she was too young to teach, she earned another certificate during the next year, but when she was still not allowed to teach because of her age, she moved to New York and worked as a cook in a hotel before returning to Nova Scotia to teach. Catherine learned many folksongs from her mother, and in 1943 Dr. Helen Creighton visited her at Chebecuto Head to record a few sea songs and ballads. After Dr. Creighton publicized her singing, Catherine performed on the radio and gave concerts for several years. Many of the records made at the lighthouse can be found in the Library of Congress in Washington, D.C.

A one-and-a-half-storey dwelling was built for an assistant keeper at Chebucto Head in 1949, and in 1951, a new fog alarm building was erected. As the old redbrick fog alarm building was no longer needed, the military at Fort Chebucto was allowed to remove it as a demolition exercise. The current lighthouse, a concrete, octagonal tower, was completed in 1967. Shortly after this, various towers were placed on Chebucto Head for Halifax Harbour Control.

Stanley Flemming was working at a radio station in Portuguese Cove after getting out of the navy after the war, when his wife Anne suggested he respond to the ad they saw in the newspaper for a keeper at Chebucto Head. The Flemmings moved into the square, wooden lighthouse in 1949, and they would call Chebucto Head home for the next thirty years. Anne spent the happiest years of her life at Chebucto Head raising a family of five children.

There was one time, she recalled, it was Christmas and the power went off. It was off for three days, and we had to cook our turkey in a wood stove that was down in the fog alarm. The wood stove would only take half the turkey at a time so we had to put one end in first, cook that, and then turn the other side and cook it that way. I had started to make pies and of course the power was off, and I couldnt do them in the oven, so he took those down and cooked them on top of the stove. Well it was a very, very odd Christmas believe me! Pies that were half-cooked. The turkey was half cooked. But it was fun.

A lot of tourists came up there, Anne remembered, and we had to show them the light. I kept a log and everyone that came up to visit I had them write their names in the book. Sunday dinner, Sunday lunch, it didnt matter. Theyd come to the door and want to go up and see the light so my husband would take them up there, through my house, upstairs to the light. Of course his dinner had to wait while he explained everything to them. Actually we met a lot of people there that I still correspond with. People from Tampa, people from Connecticut, Kansas, lots of people came there.

Stan Flemming had open heart surgery in 1978 and had to take a years leave of absence afterward. After he returned to work, it wasnt long before the station was automated. He tried staying on as caretaker for a while, but he didnt enjoy it, and so he retired in 1980.

When we had to leave, I was the last to leave, Anne told Chris Mills in an interview around 2000. I didnt want to leave at all. I just loved it. I felt sad. I still go over there two or three times a week and sit in the car and reminisce and think of all the happy times we had there.and a few sad times.

A dwelling was removed from Chebucto Head in 1983 and another followed in 1984, leaving just the two-storey dwelling from 1940 that had served as the lighthouse for many years. Sydney Malone, a former lightkeeper, lived in it for a few years as caretaker, and then Jim Guptill, another former lightkeeper, moved in in 1989, and looked after the property.

The Chebucto Head Lighthouse Society was formed in 2003 by locals to preserve the station buildings, compile historical information, and create a community center for education and cultural purposes. On May 15, 2004, a group of around twenty-five people attended a ribbon-cutting ceremony at the keepers dwelling to celebrate the signing of a one-year lease on the property with the Department of Fisheries and Oceans. Society members set to work cleaning out the dwelling, but just nine days after they had met to celebrate the lease signing, the dwelling burned to the ground in a suspicious fire. Unable to raise sufficient funds to rebuild the dwelling, the society was forced to abandon its plans for Chebucto Head.

Located on the headland defining the western side of the entrance to Halifax Harbour.
Latitude: 44.5074, Longitude: -63.5226

For a larger map of Chebucto Head Lighthouse, click the lighthouse in the above map.