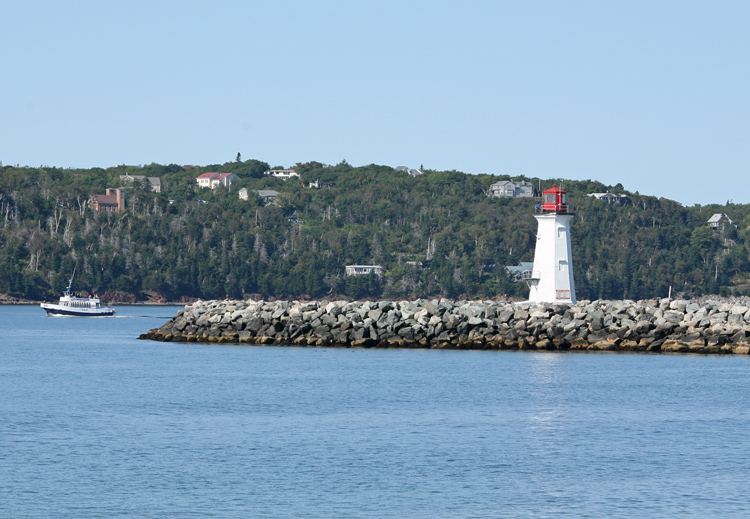 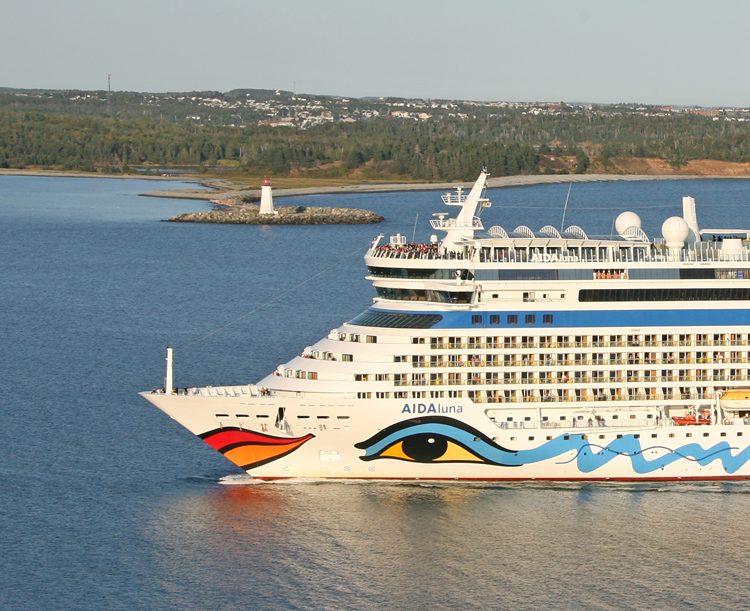 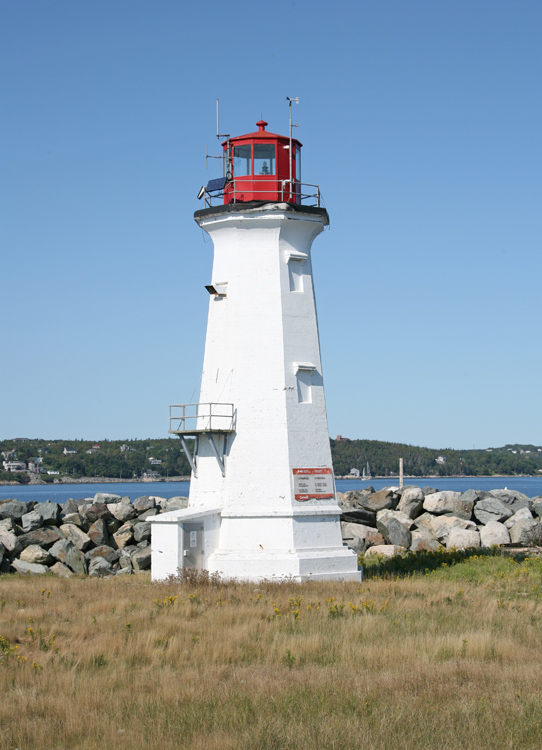 McNabs Island is five kilometres long, and just over a kilometre wide at its widest point. Roughly midway along the islands western shore, a rocky beach projects into the harbour for several hundred metres. This beach is known as Maugher Beach after Joshua Mauger, who used it for curing fish in the 1750s and 1760s. (Other spellings used for the name of the beach include Meaghers and Maugers).

Maugher Beach was also known as Hangmans Beach, as military authorities maintained gibbets (gallows) on the outer end of the beach to discourage seamen from mutiny or desertion during the Napoleonic Wars. On August 1, 1809, the boatswain, three seamen, and two marines aboard the HMC Columbine attempted an unsuccessful mutiny. The men were found guilty, executed at Halifax, and their bodies were then hung in chains on Maugher Beach. Before being hung from the gibbets, bodies were often covered in tar so they would serve as a deterrent for a longer period of time. According to tradition, Peter McNab was once so disturbed by the rattling of the chains on the bodies hanging from the gibbets that he cut down the bodies and destroyed the gibbets.

The British Empire built numerous Martello towers throughout the world in the early part of the nineteenth century to protect its colonies. These circular, masonry forts usually had two floors and housed a garrison of one officer and around twenty men. Five Martello towers were built at Halifax, with the first, Prince of Wales Tower, being built in what is now Point Pleasant Park in 1796. Work on the fifth tower, known as Sherbrooke Tower, began on the outer end of Maugher Beach in 1814, but work on it halted in 1816, after the end of the War of 1812. Work on the tower finally resumed in 1827 and was quickly finished. Sherbrooke Tower was situated opposite a Martello tower at York Redoubt on the mainland.

In 1826, a committee in the House of Assembly of Nova Scotia recommended that a lighthouse be built on Maugher Beach so that Halifax Harbour could be as easily made at night as in the day time. As it was, if mariners reached Sambro Island Lighthouse at night, they were forced to stand off because there was no inner light to guide them into the harbour. Colonel Gustavus Nicolls, commander of the Royal Engineers at Halifax, felt it was more desirable to place the proposed light on top of Sherbrooke Tower rather than build a separate lighthouse on Maugher Beach. After approval was obtained from the Board of Ordnance, a short tower topped by a lantern room was built atop Sherbrooke Tower under the condition that if the tower was required for military purposed, the light would be removed. The light on Sherbrooke tower was placed in operation in April 1828.

Abraham Gesner was born in Nova Scotia but went to England to study medicine after marrying the daughter of Dr. Isaac Webster in 1824. While in London, he became quite interested in geology, but he completed his medical studies, returned to Nova Scotia, and set up practice in Parrsboro. In 1836, he published a study of the mineralogy of Nova Scotia that included a detailed map of key iron ore and coal deposits. Two years later, he was appointed provincial geologist of New Brunswick and charged with making a geographical survey of that province. During this survey, he discovered a bituminous asphalt substance in 1839 that he named albertite, after Albert County where he found it. Using albertite, Gesner developed a process to refine a liquid fuel from coal, bitumen, and oil shale that he called albertine oil or kerosene

In May 1851, Gesner was granted permission to use Maugher Beach Lighthouse as a testing site for his kerosene. While the kerosene provided a cleaner and brighter light, a committee sent to investigate the matter decided that the expense of fitting and keeping in repair the fixtures required for supplying a single light with gas, especially in such localities as are usually occupied by light houses, would exceed any probable advantage that could accrue from its use. Use of kerosene at Maugher Beach was apparently discontinued, but it was reintroduced in 1863 and would later be adopted around the world.

A separate building was erected at Maugher Beach in 1853 to serve as a keepers dwelling, but as the sea would occasionally dash completely over the timber keepers dwelling in autumn and winter storms, the keeper would often reside in the base of the stone tower during that time. A temporary timber breastwork was constructed in 1867 to protect the foundation of the tower from damage that had been caused by violent storms. By 1869, the Imperial Government had abandoned Sherbrooke Tower as a fort, so the cost of repairing the tower had to be covered by the Dominion Government. In 1869, wedges were being used to hold some exterior stones of the tower in place, and the masonry between the outer and inner walls was starting to crumble

David George, who had been keeper since 1846, was placed on the superannuation list in 1873, and Edward Horne was transferred from Peggys Point to take charge of Maugher Beach Lighthouse. Keeper George helped with the kerosene experiments at Maugher Beach and served more years at the station than any other keeper.

A hurricane on October 12, 1871 seriously injured the tower, causing the need to clean out the old mortar and repoint the stone blocks with cement. Pilings, brushwood, and stone were placed on the seaward side of the tower and keepers dwelling to prevent further erosion. In 1875, a double row of piles was driven into the seabed along the beach for about 600 feet and filled in and backed with heavy stone. Keeper Horne reported that had it not been for this work, the sea would have breached the narrowest part of the beach and carried away the keepers dwelling.

A wooden bell tower was built on the south side of the lighthouse in 1876, and the annual salary of Keeper Horne was increased from $400 to $450 to cover the extra work required to tend the machinery that tolled the bell seven times each minute during limited visibility. His salary was increased to $500 in 1879 so he could hire and assistant to help to care for the light and fog bell.

After a fog signal building had been built at Maugher Beach, a Neptune fog trumpet was placed in operation on April 1, 1889, and the stations fog bell was transferred to Georges Island. In 1901, an octagonal, iron lantern room, fabricated by Victoria Foundry of Ottawa for $300, was placed atop the lighthouse, and a fifth-order Fresnel lens took the place of the lamps and reflectors previously used. In 1903, the characteristic of the light was changed from fixed white to flashing white, and a ten-inch whistle was installed in place of the reed horn used for the fog alarm. The whistle was sounded by compressed air and gave a five-second blast every twenty-five seconds.

In 1906, a temporary light was exhibited while the light tower was raised ten feet, and a third-order Fresnel lens, manufactured in France by Barbier, Benard & Turenne, was installed in a new lantern room. This more powerful lens had eight flash panels, revolved once every forty-five seconds, and was illuminated by a lamp burning petroleum vapour under a mantel. A new fog alarm building was also constructed in 1906 to house a diaphone foghorn that gave a three-and-a-half-second blast every thirty seconds. The Canadian Fog Signal Company of Toronto provided the fog alarm machinery at a cost of $8,500. The lantern room and sloping roof of the Martello tower were painted red, while the two-storey stone tower and light tower were painted white to effectively give the lighthouse red and white horizontal bands. The diaphone foghorn was initially mounted on the lighthouse but it was soon relocated to the fog alarm building.

Freemand and Griffin of Isaacs Harbour built a new double-dwelling and boathouse at the station in 1913.

A powerful winter storm in 1931 inflicted severe damage to the south side of the tower. Most of the stones in the outer wall were torn off exposing the inner masonry. The Martello tower was repaired, but a decade later, the present concrete lighthouse was built, and the historic stone tower was dismantled over the next few years.

The fog alarm building was demolished in 1975, after the foghorn was moved to the lighthouse. Hector G. Lowe was placed in charge of Maugher Beach Lighthouse in 1970. Three years later, he was told his employment would end in six months, but he remained at the station until 1983, when full automation was finally achieved.

A massive breakwater employing large granite boulders was constructed in 1987 to protect Maugher Beach and shortly after that the duplex was razed. The stations foghorn was discontinued in 1993.

For a larger map of Maugher Beach (McNabs Island) Lighthouse, click the lighthouse in the above map.

For options on reaching McNabs Island click here. You can also get a decent view of the lighthouse from York Redoubt National Historic Site, located in Fergusons Cove.


I had photographed this lighthouse from York Redoubt, but thought it was worth getting up close to the tower. McNabs Island Ferry shuttled me to the eastern side of the island, and then I hiked to the western side of the island. It is a good idea to have a map of the island and to know that Lighthouse Road, the easiest way to access the lighthouse, has been washed out. To visit the lighthouse without getting wet, you need to go via Strawberry Battery and pass on the south side of Hangmans Marsh. Give yourself at least two hours on the island as a good portion of the hike is across a rocky beach that is tough on the ankles.