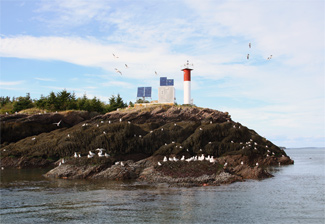 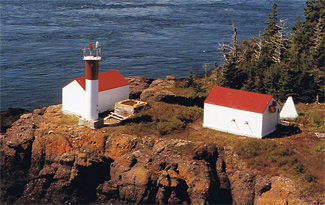 On June 16, 1903, a fog bell was established on the southwest point of Cherry Island to assist mariners in locating the entrance to the St. Croix River. The bell surmounted a square, wooden tower, painted white, that stood seventeen feet tall. During thick or foggy weather, machinery would strike the bell two times in quick succession every six seconds. The machinery cost the Marine Department $400, and the tower was constructed by John Kelly, superintendent of lights, at cost of $633.34.

Harvey V. Chaffey was responsible for the station from 1903 until 1914, when Mendel Fountain took charge. In 1907, the Marine Agent at Saint John suggested improvements in the fog signal at Cherry Island, but the Chief Engineer was not in favour of a change. The original signal was apparently used until 1914, when a better fog bell was installed under the direction of D. J. Gallagher at an expense of $157.62. A No. 4 Gamewell striking mechanism was placed in operation in 1920.

In 1969, a directional light was placed atop the truncated fog tower, which was later replaced by the current cylindrical tower.

For a larger map of Cherry Island Lighthouse, click the lighthouse in the above map.

Visible from Campobello-Deer Island Ferry as well as from the ferry landing in Eastport, Maine.