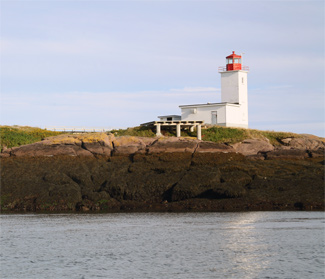 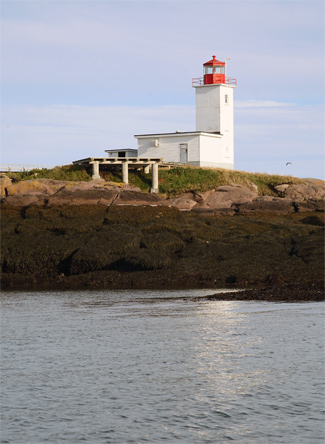 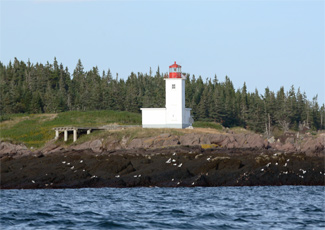 Samuel Bliss, born in 1750 to the Reverend Daniel and Phebe Bliss, was making his living as a merchant in Greenfield, Massachusetts when he was banished from the colony by the Proscription Act of 1778 for being loyal to the crown. After fighting with the British Army in New York and New Jersey during the Revolutionary War, Samuel was rewarded in 1784 with 500 acres fronting the river in LEtang, New Brunswick and later with a nearby large island that is still known as Bliss Island.

Samuel built a fine home on his island before passing away in 1803 in his early fifties. Starting in the 1990s, Professor David Black of the University of New Brunswick led excavations of the Samuel Bliss homestead and discovered that the loyalist must have had an extensive farming operation as bones from pigs, chicken, cattle, and sheep were found on the site.

Head Harbour Lighthouse was established on the northern tip of Campobello Island in 1828 to mark the southern side of the northern entrance to Passamaquoddy Bay, and it was only logical that another lighthouse would eventually be built to mark the northern side of this entrance. Located 8 km (5 miles) northeast of Head Harbour Lighthouse, with just open water in between, Bliss Island was a natural site for this second lighthouse, which could also mark the entrance to the protective anchorages of Bliss Harbour and LEtang Harbour.

Bliss Island Lighthouse was constructed in 1871 and commenced operation on December 1 of that year, with Jarvis Clarke serving as its keeper at an annual salary of $200. The lighthouse was a square wooden tower, painted white, and exhibited a fixed red light produced by five flat-wick lamps backed by eighteen-inch reflectors. The wooden lantern room had five panes of plate glass, and its floor was covered in zinc. In 1872, a signal gun, which was the property of the International Steamboat Company and had been in use at Point Lepreau, was transferred to Bliss Island where it was fired during foggy weather. A fog trumpet was also blown in response to the whistle of steamers to help them navigate during periods of reduced visibility.

In regard to the light on Bliss Island, I have much pleasure in informing you that I believe the same has been efficiently kept. The gun has been promptly fired, and the air trumpet sounded during foggy weather, all of which has been of material benefit to our steamer the City of St. John in navigating that portion of the Bay of Fundy.

An oil store was erected on Bliss Island in 1873, and the following year the Marine Department paid $250 for the land on which the lighthouse stood and for an adjacent lot. Much of this six-acre parcel was wooded and could provide a source of fuel for the keeper, and when cleared, could accommodate additional buildings. As it was, the keeper and his family lived in the cramped lighthouse, where the smell from the oil and lamps was anything but agreeable or pleasant.

Keeper Clarke made numerous appeals for a detached dwelling or at least an addition to the present quarters to house his large family, and this request was fulfilled when James Donohue was paid $745 in 1876 to construct a dwelling near the lighthouse. A bridge was put in place to span a gully located between the dwelling and the lighthouse.

Keeper Clarkes next request was in 1878 for a supply of medicine and directions for use as members of his family were not very healthy. Two years later, in July of 1880, Jarvis Clarke, who had previously served as a pilot for the port of St. Andrews, passed away and was replaced by Hugh Maloney.

The structures on Bliss Island were regularly painted and repaired, and occasionally significant alterations were performed as recorded in the Annual Report of the Department of Marine for 1900. The lighthouse has been painted inside and out, this year. The eastern side of the roof of the keepers dwelling was reshingled, also the ell. The ceiling of the sitting-room was sheathed and wainscoting 20 inches in height placed around the room. The ceiling of hall on the second floor was also sheathed. Two rooms were papered and the dwelling painted inside and out. Three outside sashes were also furnished.

The characteristic of Bliss Island Light was changed on January 15, 1901 from fixed-red to fixed-white, which greatly increased its range and usefulness. In 1903, an octagonal iron lantern replaced the lighthouses original wooden lantern, and the height of the tower was increased to forty feet, as measured from its base to the vane atop the lantern. That same year a fifth-order lens was installed to produce an occulting white light, with a repeating characteristic of ten seconds of light followed by a five-second eclipse. These improvements to the lighthouse, made under the direction of the local agent for the Department of Marine, cost $1,248.43.

The present Bliss Island Lighthouse, a one-story concrete fog alarm building with a square tower rising from one corner, was built in 1964 and currently emits a red flash every four seconds.

Located on the southwest point of Bliss Island, marking the entrance to Bliss Harbour that leads to Blacks Harbour.
Latitude: 45.01809, Longitude: -66.85061

For a larger map of Bliss Island Lighthouse, click the lighthouse in the above map.

As the island is well offshore, the lighthouse is best seen by boat.