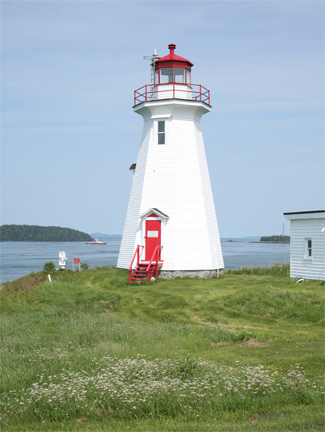 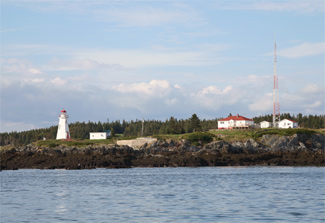 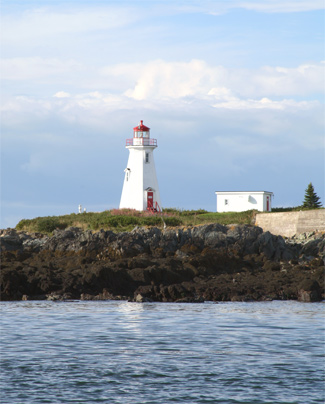 Bounded by Greens Point on the east and Macs Island on the west, Letete Passage was a thoroughfare used by vessels to enter Passamaquoddy Bay en route to the wharves at St. Andrews, St. Stephen, and St. George. Letete is derived from the French la tete, which means the head, and likely refers to the headlands that bracket the passage.

In 1878, Parliament appropriated $1,500 for the erection of a steam-powered fog alarm at Letete Passage in Charlotte County, and the following year, D. W. Clark constructed the fog alarm building and a reservoir to supply the needed water at a cost of $2,774. A fog trumpet of a new and improved design was procured from the Neptune Fog Horn Company of Quebec for $1,750 and placed in operation in 1879. Every thirty seconds during thick weather, fogs, and snowstorms, the trumpet would sound seven-second blasts that could be heard an estimated six miles with the wind and just two or three miles against the wind.

Tenders were invited in 1879 for the construction of a substantial two-story dwelling to be used by the fog alarm engineer, and the contract was awarded to Angus Fisher of St. George, for the sum of $644. Samuel Craig was the first engineer to be assigned to the fog alarm, but he was transferred to Head Harbour in late 1879 and replaced by Neil Seely, who was given an annual salary of $400. In 1882, Neil Seely was transferred to Head Harbour to replace Keeper Craig, and George Helms was assigned to the fog whistle at Letete Passage.

As a retired sea captain, George Helms understood the risk presented by navigational hazards in the area and was familiar with many sailors of the North Atlantic. One of these sailors was Charles Dines, born in Mississippi, who faced a personal dilemma when his wife died in 1869, leaving behind a three-year-old son, Sidney S. Dines. Unable to take Sidney along on his sailings, Charles Dines decided to allow his friends George and Elizabeth Helms to adopt him. Starting in 1883, Sidney, then seventeen, was listed as an assistant engineer at Letete Passage, earning an annual salary of $150.

Besides the dwelling and fog alarm building, a coal shed was provided to store the roughly ninety tons of soft coal that was needed to run the boiler during the year. A blacksmith shop was built in 1898 using material left over from repairs made to the other structures. In 1900, a new boiler was placed in the fog alarm building. The previous boiler was an upright one, but the new one was a locomotive boiler, and an opening had to be made in the western side of the building to get it inside.

The biggest change to the station occurred in 1903, when a lighthouse was placed on Greens Point, then also known on navigational charts as Mascabin Point. C. L McKeen of St. Andrews built the wooden octagonal tower at a contract price of $800. The lighthouse was constructed at St. Andrews in eight sections, which were then transported to the point by scow and assembled at a spot just northwest of the fog alarm building. Topped by a red, octagonal, iron lantern, the tower measures forty-three feet from its base to the top of its ventilator and originally exhibited a fixed-white light from a seventh-order lens.

By 1906, so much of the peninsula connecting Greens Point to the mainland had eroded away that it was necessary to construct a protection work of square hemlock timbers, measuring 240 feet long, nine feet wide and seven feet high, that was bolted together and filled with ballast stone. The seaward side of this breakwater was rip-rapped to a height of four feet. The following year, a three-room addition was made to the dwelling, bringing the total number of rooms in the two-story house to nine.

During the winter of 1907, Captain Helms passed away, and Sidney Dines was appointed head keeper. While George Helms served nearly twenty-five years as keeper, his adopted son logged fifty-three years of service at Greens Point, twenty-nine of those years as the head keeper. Sidney married Mary Gates, daughter of a local preacher, in 1887, and they were blessed with five daughter and four boys over the years along with two adopted children. On November 7, 1936, Sidney S. Dines received a medal for his long and faithful service from His Majesty King George VI that was presented by the Charlotte County Member of Parliament and J. C. Chesley, Saint John Agent for the Department of Transport.

In the fall of 1920, a new fog alarm building was constructed on the point to house a Class B diaphone, powered by oil engines. The installation was completed the following year at a cost of $7.338. Keeper Dines had little faith in the newfangled gas motors and might have given up as keeper if his son Prescott hadnt pitched in to keep them operating.

Prescott Dines took over as keeper of Greens Point Lighthouse in 1936 when his father Sidney retired. Though electricity arrived at nearby Letete in 1937, Prescott recalls that electricity didnt reach the station until 1952 because a neighbor wanted to charge the power company $10 per pole to cross his land.

Gale force winds occasionally buffeted exposed Greens Point. An early occurrence was the Saxby Gale, named for Stephen Saxby who predicted it, that struck New Brunswicks southeast coast in October of 1869. A high tide coupled with hurricane-force winds cut off the point from the mainland, a problem that would afflict keepers a few times after the station was established.

Prescott remembers one winter gale that blew his mother right out of a one-horse sleigh, depositing her on rocks six feet below. Thanks to a large buffalo robe she was wrapped in, she suffered no harm. One of my mother's guests chose a very windy day to visit us at the Lighthouse and consequently, the Privy house, Prescott recalls. No sooner had the gentle lady finished her business and exited from the Privy - when an extra big puff of wind blew the little building over the bank and onto the rocks below.

In 1962, a year before his retirement, Prescott, who weighed about 130 lbs., experienced the full force of the wind firsthand. The wind was of gale proportions and it took complete and absolute charge of me. The next thing I knew I found myself down on all fours among the rocks, alone and much bruised. I made up my mind, then and there, that as soon as possible I would retire, while I still had two feet and legs on which to go.

In 1963, the original cedar-shingled dwelling, which was still structurally sound, was demolished to make way for modern keepers quarters. Two new houses were finished the following year, one on the spot of the old dwelling and the other on the eastern side of the point. The eastern dwelling was sold and relocated to Back Bay in 1979.

In the late 1980s, Greens Point became a monitoring station for several other lighthouses in the area. While most of the nearby stations were de-staffed, four full-time keepers were needed at Greens Point to cover all the lights.

After news of the planned de-staffing of Greens Point leaked out in 1995, a few concerned citizens formed the Greens Point Light Association to maintain the station as an educational and recreational facility. An informational meeting was held in the remaining keepers dwelling on November 10, 1996, and with growing support, an agreement allowing use of the property was signed between the association and the Canadian Coast Guard on December 4, 1996. The following July a Marine and Coastal Interpretive Center, which has displays on the lighthouse, coastal flora and fauna, and local marine industries, was opened in the keepers dwelling.

After being fully automated since 1996, Greens Point Light was officially decommissioned on September 8, 1999, though the fog alarm remains in use. Ownership of the lighthouse and station was transferred to the Greens Point Light Association in July 2008. A Coast Guard monitoring station on the property has served since 2002 as a vacation rental to raise money to maintain the property.

For a larger map of Green's Point (Letete Passage) Lighthouse, click the lighthouse in the above map.

From Highway 1, just west of St. George, take NB 172 south for 16 km (10 miles) to Deer Island ferry. Just before the ferry, there is a road on your left that leads a short distance to Green's Point Lighthouse. A museum in the keepers dwelling, operated by Green's Point Light Association, is typically open between mid-June and Labour Day from 9 a.m. to 5 p.m. The former Coast Guard monitoring station near the lighthouse can be rented by the week by calling (506) 755-3630.