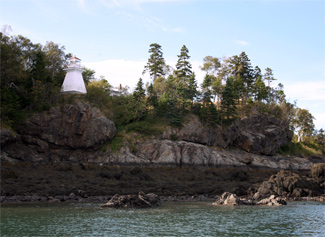 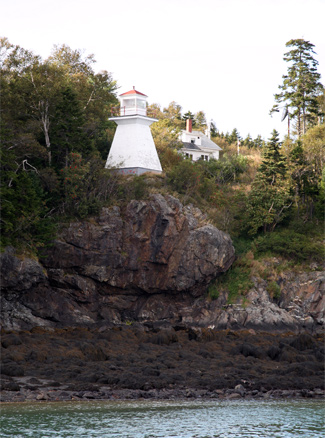 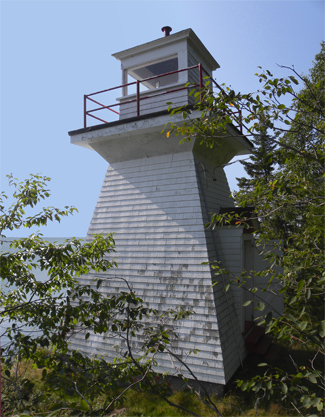 Leonardville Lighthouse, a white square tower with sloping sides and a height of twenty-seven feet, was erected atop a cliff on the eastern shore of Deer Island in 1913 under contract by A.L. Mury of West Archichat at a contract price of $896. A lamp inside a sixth-order dioptric lens originally produced the light, which has a focal plane of fifty-nine feet above high water.

The tower marked the western side of the entrance to Leonardville Harbor, a very small and shallow bay located between Deer Island and Bar Island, a small island just offshore.

Alonzo H. Conley was the first keeper of the lighthouse, and in 1936 he wrote to his superior, J.C. Chesley, an agent for the Department of Marine and Fisheries, to tell him of a large meteor that fell into the ocean off Harbour-de-Lute on Campobello Island. Keeper Conley was informed of this unusual event, which happened in daylight, by a resident of that place who reported, When it struck, the water steamed and hissed like a cauldron of boiling water and bubbled vigorously  large waves washed ashore. Mr. Chesley replied that he would provide the information to the dominions meteorological department in Toronto.

For a larger map of Leonardville Lighthouse, click the lighthouse in the above map.

Deer Island can be reached by ferries from L'Etete, Eastport, and Campobello Island. Once on the island, the lighthouse can be seen through the trees from NB 172/772 on the eastern side of the island, just south of Leonardville.