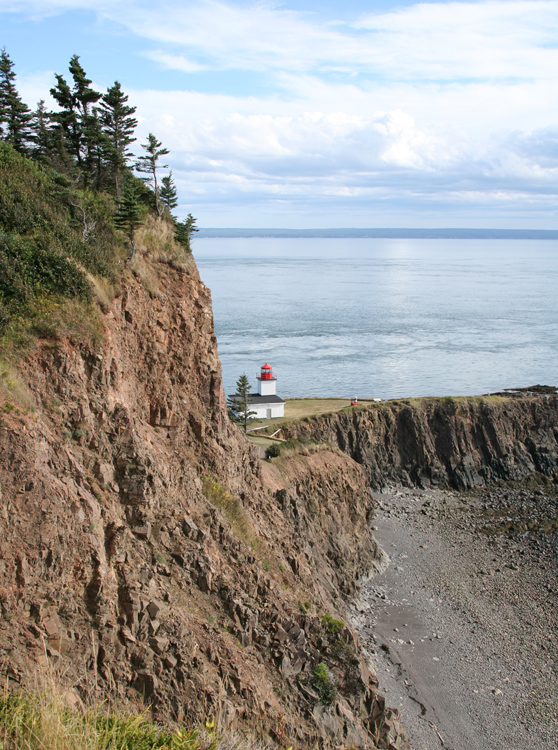 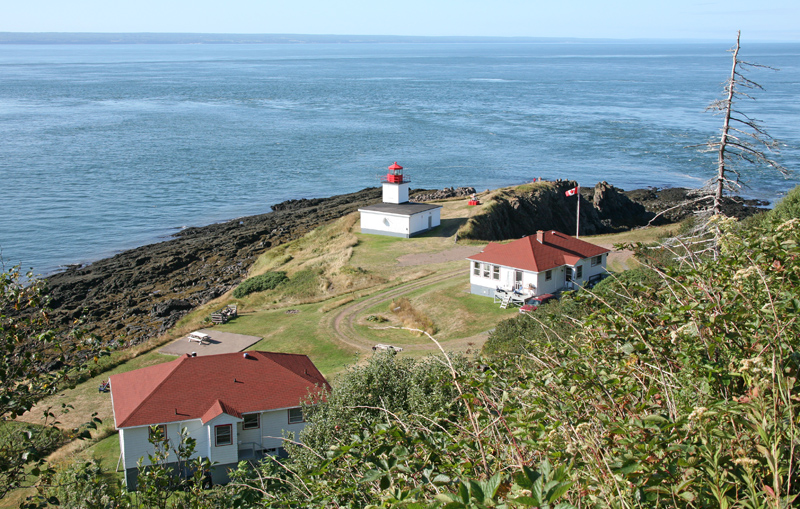 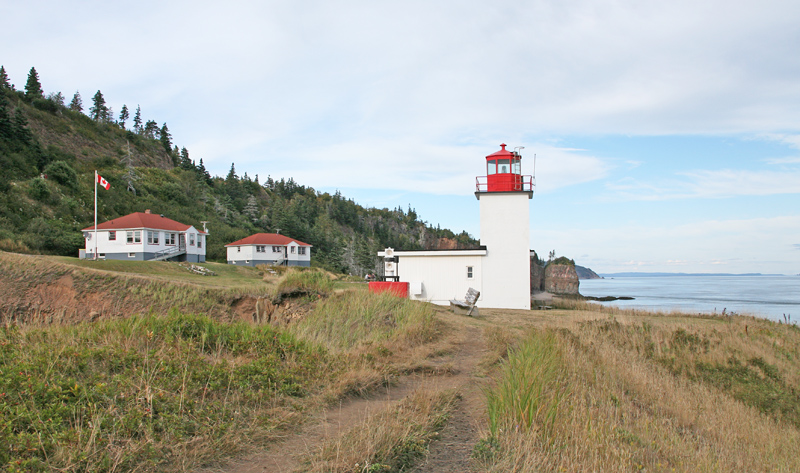 French explorer Samuel de Champlain named Cape dOr (Cape of Gold) when he sailed by in 1607 and noticed glimmers of gold in the basalt cliffs. Turns out the metal in the cliffs was copper rather than gold, but the name stuck, and today many come to the cape to enjoy the golden sunsets, which seem to be specialties of this spot.

The first navigational aid on Cape dOr, which marks the northern entrance into Minas Basin from the Bay of Fundy, was not a light, but rather a steam fog whistle, which was placed in operation in December 1874. The Department of Marine noted the establishment of the fog whistle in its annual report:

During the last year, a fog whistle has been erected on Cape d'Or, in the Bay of Fundy, but has not yet been advertised though it has been in operation for some months. The supply of water was not sufficiently steady to justify the usual public notice. The machinery was furnished by Messrs. Allen Brothers, of St. John, N. B., for the contract price of $3,000, and the buildings, reservoir, &c., were constructed by Messrs. Clark & Stackhouse by contract, for $4,850; they also built a coal-shed for $300, and a tram-road from the rock on the beach up to the side of the bank  75 feet, and thence 200 feet to the coal-shed, near the whistle-house, for $290. This arrangement will facilitate greatly the landing of coal, &c., at this steep and difficult point.

The whistle will be sounded as follows: Two blasts, of six seconds each in a minute, with intervals of twenty-four seconds each, as follows :-

The fog alarm was expected to be heard up to a distance of twenty miles in calm weather or with the wind, but the range would be reduced to five to eight miles in stormy weather or against the wind.

A storm in the fall of 1877 swept away the tramway used to haul coal up to the station from the beach and destroyed the stations boat. To provide another means to supply coal to the fog alarm station, a road was built to Horseshoe Cove.

To enhance the water supply, which was dependent on rainfall and spring runoff, a second cistern was built in 1877. This circular reservoir, which had a diameter of twenty-two-and-a-half feet and was ten feet deep, was constructed of cement and bricks and fed by a galvanized pipe that ran to a swampy area at the top of the hill.

The cape didnt receive a light until 1922 when a 6.7-meter-tall, pepper-shaker tower was relocated from nearby Eatonville, where it had been erected in 1908. At Cape dOr, the tower was mounted on a red wooden trestle near the fog signal building and continued to display a fifth-order light. Malcome McLeod, who had been serving as the Fog Alarm engineer since 1917, took on the added responsibility of the light.

The present lighthouse, consisting of a one-story fog signal building with a light tower rising from one corner, was built in 1965. After automation in 1989, the two nearby keepers dwellings, completed in 1959, sat vacant until being leased by the Advocate District Development Association in 1995 and converted into a tearoom and hostel.

Darcy Snell first visited Cape dOr in 1994 and was impressed enough to relocate from Saskatchewan to take over operation of the site in 2000. Snell, and his wife, Jenna Boon, opened a full-service restaurant in one dwelling and a guesthouse in the other. This is the only lighthouse in Nova Scotia to offer overnight accommodations.

For a larger map of Cape d'Or Lighthouse, click the lighthouse in the above map.

From Route 209 just west of Advocate Harbour, turn south onto Back Street, and then take Cape d'Or Road (a dirt road) and continue 5.6 km (3.5 miles) to its end where you will find Cape d'Or Lighthouse. There are two keeper's dwellings adjacent to the lighthouse. One houses a restaurant, and the other has four rooms available for overnight stays. A short hike down and up a steep road is required to reach the lighthouse from the parking area.