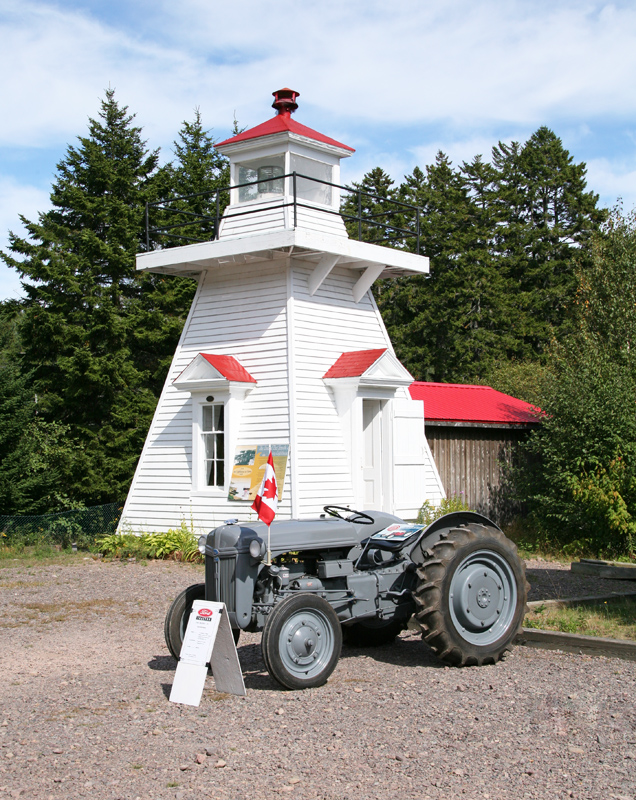 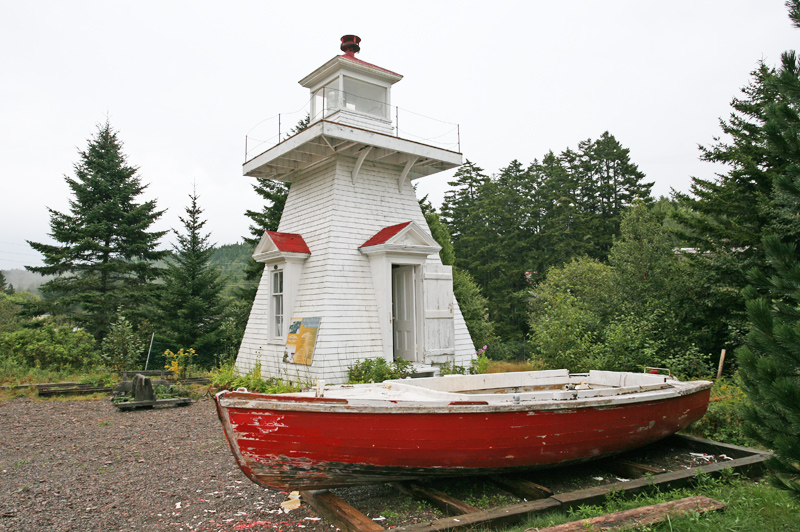 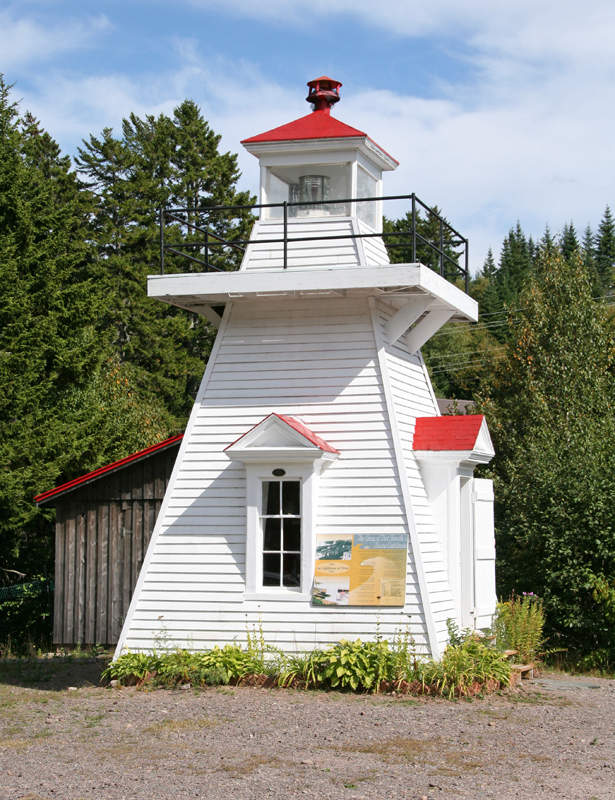 Port Greville is situated at the mouth of Ratchford River on the northern side of Minas Basin, roughly midway between Cape dOr and Parrsboro. A high gravel bar, which runs parallel to the shore here, forms the harbour. The river runs between the shore and the bar for almost a kilometer before emptying into Minas Basin. In 1874, a wall of round timber cribwork, 2,200 feet in length and seven feet tall, was built along the gravel bar to provide additional protection for the harbour. In 1907, John D. Reid, of Wallace Bay, built a pair of range lights to mark the harbour at Port Greville at a contract price of $790, and the following Notice to Mariners was published the next year to advertise the new lights:

Range lights have been established by the Government of Canada at Port Greville, Nova Scotia, leading into Ratchford Creek, Bay of Fundy.

The tower from which the front light is shown stands on the lower level of the bank close to a road leading rom the upper bank to the wharves below.

The tower is an enclosed wooden building, square in plan, with sloping sides, surmounted by a square wooden lantern, the whole painted white. The height of the tower from its base to the top of the ventilator on the lantern is 25 feet.

The light is a fixed red light, elevated 59 feet above high-water mark, and should be visible 6 miles from all points of approach by water. The illuminating apparatus is dioptric of the sixth order.

The back light stands on the bank near the main road leading from Port Greville to the westward, 700 feet N. 17° W. from the front light. It is shown from an anchor lens lantern hoisted between two poles 15 feet high with a shed at the base. The light is a fixed red light, elevated 130 feet above high-water mark, and should be visible 6 miles.

The lights in one, bearing N. 17° W., lead into Port Greville Harbour between the breakwater and the shore, clear of all obstructions.

Ernest A. Hatfield was appointed the first keeper of the range lights on June 29, 1908.

In the late 1930s, the keeper of the range lights wrote a desperate plea to his superiors to send a barrel of kerosene on the next ship as he had run out and the villagers were having to donate from their private stock to keep the lights lit each night.

Port Greville was known for shipbuilding, and over the years eighty-four known sailing vessel were built there, including seventy-six schooners, six brigantines, one bark, and one barkentine. One of the more prolific local companies in the post-age-of-sail era was Wagstaff and Hatfield Shipbuilding, which was formed in 1933 by George Wagstaff and Otto Hatfield. The firm, which was a major employer in the area, built around 150 long liners, seiners, and draggers and was kept busy during World War II building twelve wooden-hulled minesweepers for the British Admiralty.

In 1972, inflation brought an end to shipbuilding at Port Greville as Wagstaff and Hatfield suffered severe financial losses on a few contracts that had been secured at pre-inflation prices. Even after being forced to close, George Wagstaff had hopes that his company could reopen, but this dream ended on February 2, 1976, when the Groundhog Day gale swept into Port Greville and destroyed the shipyard. George Wagstaff was watching on the bluff overlooking the shipyard that day as his main building collapsed and the wharves were washed out.

With the harbors main industry gone, the Coast Guard decided to deactivate the lighthouse, and in 1981, the tower was sawed in half and trucked to the Canadian Coast Guard College near Sydney, where it served as the centerpiece of a nautical display that also featured various lights and buoys.

After the successful opening of the Age of Sail Heritage Centre at Ward Brooks in 1995, the community felt their historic lighthouse would make a great attraction. The centre contacted the director of the Coast Guard College in September 1997, and a few months later, a letter was received confirming that the college was willing to let Port Greville Lighthouse return home.

In June 1998, the lighthouse was sawed in half again, loaded onto a truck, and driven over 250 miles back to Port Greville. After being reassembled and painted, the lighthouse was open to the public on the grounds of the Age of Sail Heritage Centre in August of that year.

The lighthouse was placed on the Canadian Register of Historic Places in 2009. In 2010, the lighthouse was renovated using clapboard siding, stained on both sides, that was placed over the existing shingles. The following spring, a new railing, made and donated by Kerwin Davidson, was installed around the lantern room.

In 2012, there was still a daymark on the bank near where the wooden lighthouse tower used to stand to help guide mariners into the harbour.

For a larger map of Port Greville Lighthouse, click the lighthouse in the above map.

From Route 209 in Port Greville, travel west for about one kilometre and you will see Port Greville Lighthouse located alongside Route 209 at Age of Sail Heritage Museum.

The lighthouse is owned by Port Greville and managed by Age of Sail Heritage Museum. Grounds open, tower open in season.