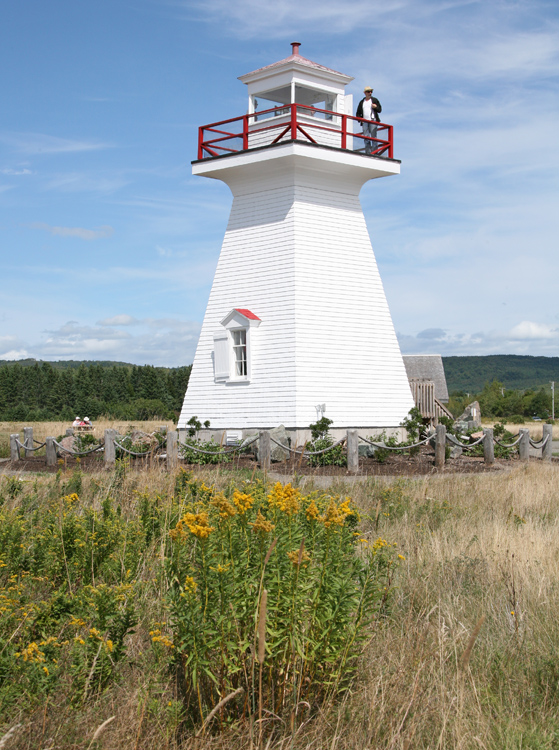 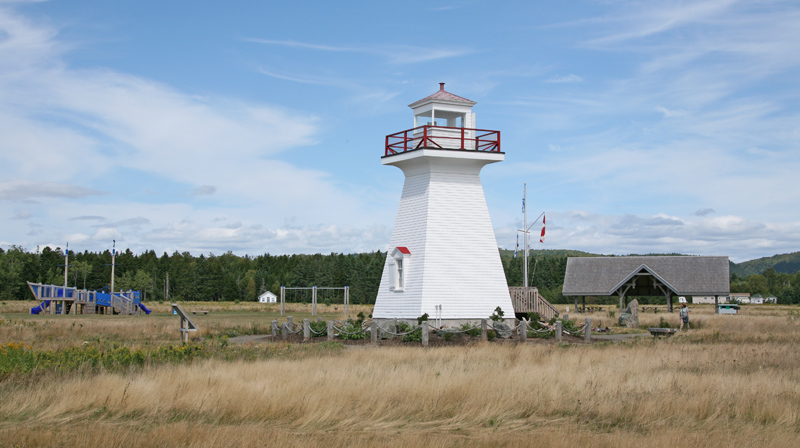 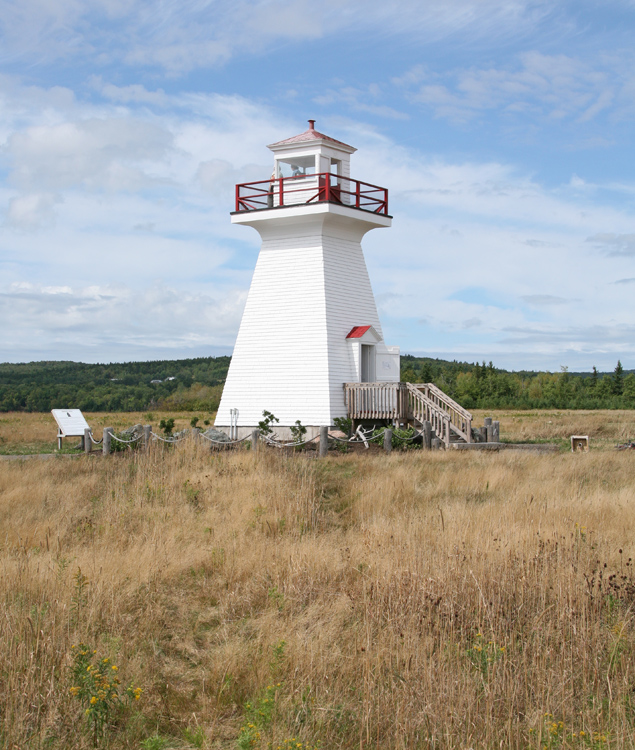 Five Islands Lighthouse has been moved three times to escape shore erosion: first in 1952, again in 1957, and a third time in 1996, when it was purchased by Colchester County and moved to the nearby Sand Point Beach Campground.

Under a $750 contract, A. L. Mury of West Arichat built a combined wooden lighthouse and dwelling in 1913 on two acres of land on Sand Point purchased from David Corbett. Cyrus A. MacBurnie was hired as the first keeper on April 6, 1914, and he served until his death in 1925. Cyrus son John then took over responsibility for the light and served until 1963.

Roland Marsh was appointed keeper in 1963 and served until 1967, when the light, which had been powered by batteries, was attached to the local power grid. The Coast Guard discontinued the light in 1993. During the winter of 1995-1996, a storm undercut the concrete retaining wall near the lighthouse, causing the wall to collapse. The tower was in danger of being lost until Anita Murphy, and Ronald MacBurnie, whose family had minded the light for fifty years, led a community group in purchasing the lighthouse and moving it to Sand Point Beach Campground.

In 2008, Sand Point Beach Campground was sold at auction, after the owner defaulted on a loan, and the lighthouse had to be moved yet again. Its caretakers, the Five Islands Lighthouse Preservation Society, struggled over the summer to raise $5,000 for the move, and then the lowest bid for the job came in around $15,000. Undaunted, the society convinced the Colchester County council to help finance the cost if no other source of revenue could be found.

On November, 6, 2008, work crews from the County of Colchester and Phil Leil Enterprises moved the lighthouse to a fifteen-acre parcel of land at the end of Broderick Lane. Gertrude Jenkins, wanting a place where people could have free beach access, had donated the property to the Municipality of Colchester in 2005 for the purpose of a park in memory of her foster son Cecil Shea.

According to Mi'kmaq, the Five Islands, located offshore from Five Islands Lighthouse Park, were created when the god Glooscap threw fistfuls of sod at the giant beaver whose dam flooded his medicine garden. As you stand at the lighthouse and look out into Minas Basin, the five island are, from right to left, Pinnacle Island, Egg Island, Long Island, Diamond Island, and Moose Island/

For a larger map of Five Islands Lighthouse, click the lighthouse in the above map.

From Route 2 (Glooscap Trail) on the west side of the village of Five Islands turn south onto Broderick Lane and continue to the community park at its end where you will find Five Islands Lighthouse. The lighthouse is open on afternoons in July and August, Thursday through Monday.