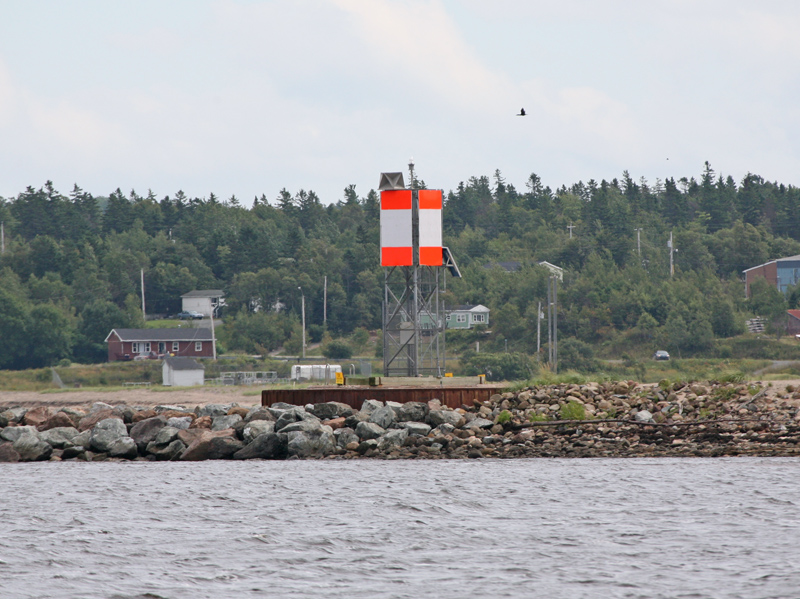 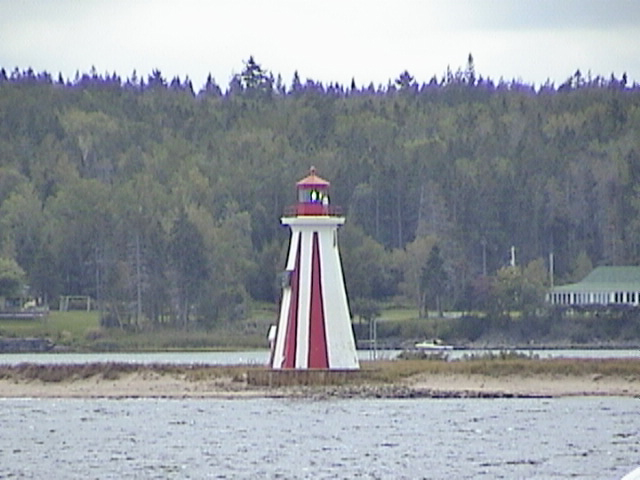 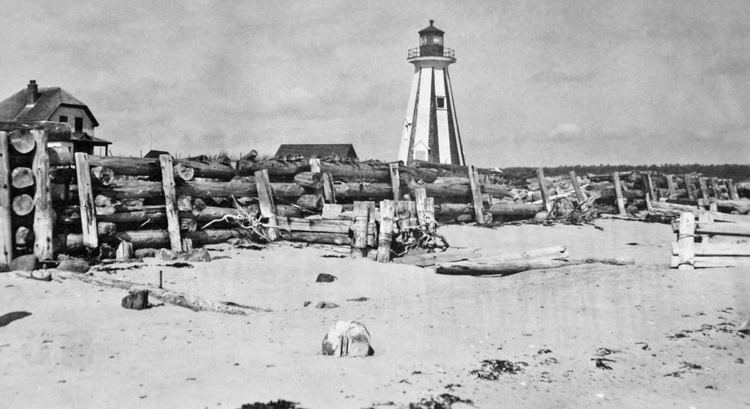 Pictou Harbour is a spacious body of water that opens onto Northumberland Strait and is fed by three rivers, East River of Pictou, Middle River of Pictou, and West River of Pictou. The entrance to the harbour is roughly 400 metres wide and is flanked by two sandbars. In 1968, the Harvey Veniot Causeway was completed across Pictou Harbour, resulting in the mouths of the West River Pictou and Middle River Pictou no longer being accessible form the harbour. The Town of Pictou, situated on the north shore of the harbour, was first settled by a few families who arrived in 1767 from Philadelphia aboard the Betsey. Seven years later, a wave of Scottish immigrants began arriving with the landing of the Hector, the first ship to sail directly from Scotland to what is now Canada. The towns tourism slogan The Birthplace of New Scotland, celebrates the areas Scottish heritage.

A lighthouse to mark the entrance to Pictou Harbour was first proposed in 1832, and the following year 500 pounds was spent in its construction near the end of the southern sandbar that protected the harbour. This lighthouse was a large octagonal tower, that stood fifty-five feet tall. Multiple lamps, set in reflectors, were employed in the lantern room to produce a fixed white light, while a fixed red light was shown from a window, twenty-five feet below the lantern room, to indicate to mariners when they were clear of the reefs off Pictou Island. The lighthouse was originally plain white, until distinctive vertical red stripes were added in 1841.

In 1850, a request was received to change the character of Pictou Harbour Light when the brig Cordelia, captained by B. Forest, ran aground on Roy Island, elven kilometres east of Pictou, after mistaking the light in a farmhouse for Pictou Lighthouse. The Commissioners of Lighthouses for Nova Scotia investigated the matter and determined that the captain should have known the light was not at Pictou based on the amount of time he had sailed from the light at Cape George. In addition, the commissioners could not understand how a candle or lamp in the window of a private dwelling, could by any reasonable person be mistaken for any lighthouse on the coast, much less that at Pictou.

Give its exposed location on a narrow sandbar that rose only nine or ten feet above the surrounding water, Pictou Lighthouse and its nearby keepers dwelling were often threatened by erosion, storms, and ice floes. Work to protect the station was carried out as early as 1853, and by 1857 a breakwater had been built to prevent the inroads of the sea. During a gale in August 1873, the breakwater was carried away, the dwelling was jarred from its foundation and much injured, and all the outbuildings were swept away. The sea also breached the lighthouse, upsetting oil tanks that resulted in the loss of 100 gallons of oil.

The dwelling, which was about forty feet from the lighthouse, was put back on its foundation and repaired, and a new kitchen was built to replace the one that had been washed away. A new 462-foot-long breakwater, which was eleven feet wide at its base and seven feet high, was fashioned out of timber and ballasted with stone and brush. The cost of the breakwater was $2,507.

Henry Lowden was appointed keeper of Pictou Lighthouse in 1839 and served until 1864, when he was dismissed for interference in an election. Keepers at the time were forbidden from taking an active part in politics. Angus McDonald was appointed keeper in his place, but when Keeper McDonald accepted a position with the Internal Revenue Department in 1868, Henry Lowden was reinstated as keeper. Keeper Lowden received serious injuries in the storm of August 1873 that damaged the station, but he remained keeper until being superannuated in 1876, at which point his son John was made keeper.

A twelve-sided iron lantern room was installed on a new deck placed atop the lighthouse in October 1877. In 1878, a light was established on top of the new custom house building in Pictou. Mariners were then able to align Pictou Lighthouse with the light on the custom house to find the proper channel for entering the harbour.

The name Pictou is derived from the Mikmaw term Piktuk meaning explosive place, which likely referred to methane that would bubble up in the harbour or a river of pitch that was found in the area. As it turned out, Pictou was an appropriate name for the lighthouse on the sandbar as it was destroyed or damaged by an explosive fire on a couple occasions. Through the years, the lighthouse was known as Pictou Harbour Lighthouse or Pictou Bar Lighthouse.

The first occasion occurred on May 26, 1903, when the lighthouse burned down. A temporary forty-eight-foot-tall mast was quickly erected near the site of the lighthouse, and two anchor lens lanterns were placed at the masthead - one to show a white light up the harbour and the other a white light down the harbour. To display the stations fixed red light, a pressed lens lantern was attached to the seaward side of the mast, twenty feet below the fixed white lights. A spherical wooden cage, painted white, was also attached to the top of the mast so vessels could use it during daylight hours to range with the custom house.

Under the foremanship of E.F. Munro, a new lighthouse was built on the site of the old tower in 1903 at a cost of $3,472. This new tower was also octagonal and painted in vertical red and white stripes like the original one, but it stood just forty-eight feet tall. Two seventh-order anchor lens lanterns were temporarily used in the lantern room to produce a fixed white light until a new illuminating apparatus arrived. A fixed red light was also shown from the seaward face of the tower below the main light.

A new two-storey, four-bedroom house was built on the sandbar for the keeper in 1919. On July 16, 1931, a serious fire broke out in the lantern room, but the quick action of Keeper William MacFarlane prevented the fire from spreading to the wooden tower. While Keeper MacFarlane was hospitalized for treatment of serious burns, his wife took charge of the light.

Pictou Bar Lighthouse was automated on May 5, 1960, and over during the next year all of the stations buildings save the tower were removed from the sandbar.

In the early evening of July 5, 2004, a fire made quick work of Pictou Bar Lighthouse. Janet Francis noticed the fire around 6 p.m. and joined the firemen and other curious on-lookers who made the mile-long trek along the sandbar to reach the lighthouse. Nothing could be done to save the tower. In less than an hour, the fire had burned through the floor of the lantern room, causing the Fresnel lens to come crashing down inside the lighthouse. There was an unmistakable audible moaning sound, almost like a last breath of a living being, accompanied by a great shower of sparks and flying debris followed by a loud gasp from those folks assembled, adding to the solemnity of this disaster, Janet said.

While there was some talk of rebuilding the lighthouse, no serious effort materialized, and the Coast Guard ended up installing a square skeleton tower at the end of the sandbar. This light appears as Lighthouse Beach on the Coast Guards Light List.

For a larger map of Pictou Bar Lighthouse, click the lighthouse in the above map.

From Pictou, take Highway 106 south to Exit 1A (Mt. William Road), and then drive east on Trenton Connector Road for 6.5 km (4 miles). Take a left onto Highway 348 and continue for 10 km (6 miles) to Fishers Grant, where you need to turn left onto Beach Road to access the spit that leads to the site of the former Pictou Bar Lighthouse.