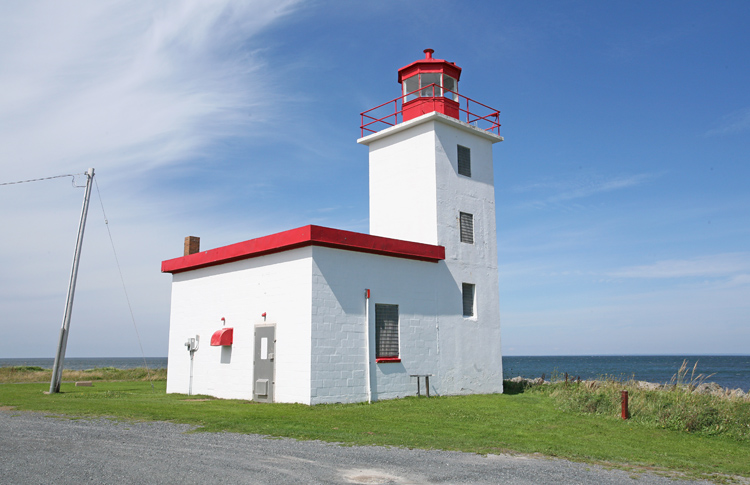 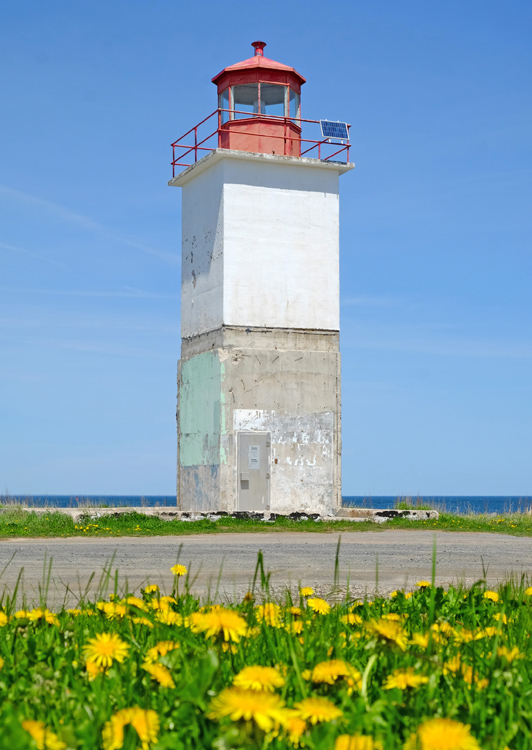 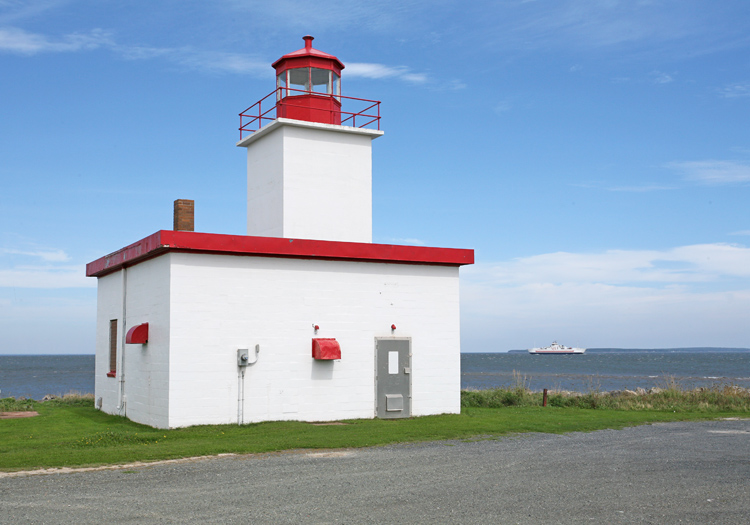 Visitors to Prince Edward Island who choose the ferry service over the Confederation Bridge get a free view of Caribou Lighthouse shortly after departing Nova Scotia. The first lighthouse to be built at Caribou Point was established in 1868 and was a combination dwelling and light tower. The Board of Works awarded a $1,450 contract to Robert Purves on July 20, 1867 to build the lighthouse, and Alexander Munroe was appointed the first keeper of the light in October of that year. The lights signature was a white flash every minute produced by a revolving apparatus with three lamps set in twelve-inch reflectors on each of its two faces.

In the first ten years of the lights operation, eighteen meters of land were lost from the point. A timber cribwork, ballasted with stone and measuring eighteen metres long by roughly two metres wide and two metres high, was constructed in 1877 to retard the erosion. The protective work was doubled in length the following year, but fighting Mother Nature is usual a losing battle. Winter gales almost totally destroyed the cribwork in 1892, forcing the Department of Marine to either rebuild the breakwater or relocate the lighthouse. The latter option was selected, and Hugh Henderson of Pictou was paid $525 to move the lighthouse.

The second Caribou Lighthouse was built on the point in 1915 under contract to W. Talbot of Pictou at a cost of $5,103.11. This lighthouse consisted of a square dwelling with an octagonal lantern placed atop its hipped roof. Though somewhat similar in appearance to its predecessor, it did provide more living space in the upper storey.

The third Caribou Lighthouse, the one that remains standing today, was constructed around 1971 and features the commonly used design for this time period of a square cement tower positioned in one corner of a one-story, flat-roofed fog alarm building. The second lighthouse, still in pretty good condition, was moved just a short distance down the road, and is still used as a private residence. The Otter family purchased the second Caribou Lighthouse from the Baird family in 2016 and have since refurbished the structure. Their next project is to rebuild the lantern room atop the lighthouse. The original lantern room from the second lighthouse is on display at Northumberland Fisheries Museum in Pictou.

Foster Welsh was transferred from Entry Island Lighthouse in the Madgalen Islands to Caribou Lighthouse around the time the third Caribou Lighthouse was built. Two keepers looked after the station when Foster first arrived, but it was soon reduced to just a one-keeper station upon the retirement of the other keeper. That keeper must have enjoyed his accommodations at the station as he purchased the cottage and hauled it down the road.

Keeper Welsh fought valiantly to keep Caribou Lighthouse staffed, citing examples of when human presence on the point had meant the difference between life and death. His efforts, along with public meetings and petitions, eventually failed, and Caribou Lighthouse was destaffed in 1990. The last remaining keepers dwelling was later removed from the station, leaving just the lighthouse.

In 2007, a two-thirds scale model of the 1915 Caribou Lighthouse was constructed by the carpentry students at Nova Scotia Community College in Stellarton using original blueprints and then assembled by members of Air Engineering Flight 114 on a pier in Pictou where it is part of Northumberland Fisheries Museum. The lighthouse contains information on the life of a lighthouse keeper and is home to Rip E. Irwins collection of lighthouse information and photographs.

In October 2016, the one-story portion of Caribou Lighthouse was demolished, leaving just the tower standing. The structure that was removed had fallen into disrepair and contained asbestos. No group expressed interest in Caribou Lighthouse when the Canadian Coast Guard was divesting several of its lighthouses in 2012, but a Facebook group called Friends of Caribou Island was quickly formed after the partial demolition of the lighthouse to try to save and improve what is left. The Coast Guard patched and painted the lighthouse in 2018, significantly improving its appearance.

For a larger map of Caribou Lighthouse, click the lighthouse in the above map.

From Pictou, travel northwest on Route 6 for 10.6 km (6.6 miles) and then turn right onto R. Grant Road. R. Grant Road will run into Caribou Island Road, which ends at Caribou Lighthouse.