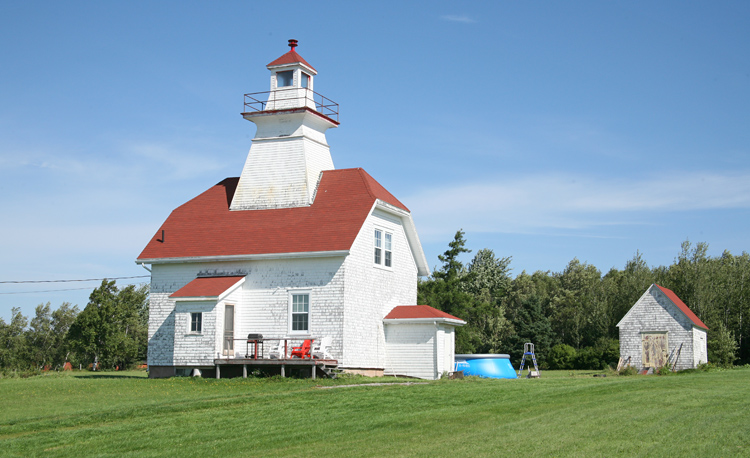 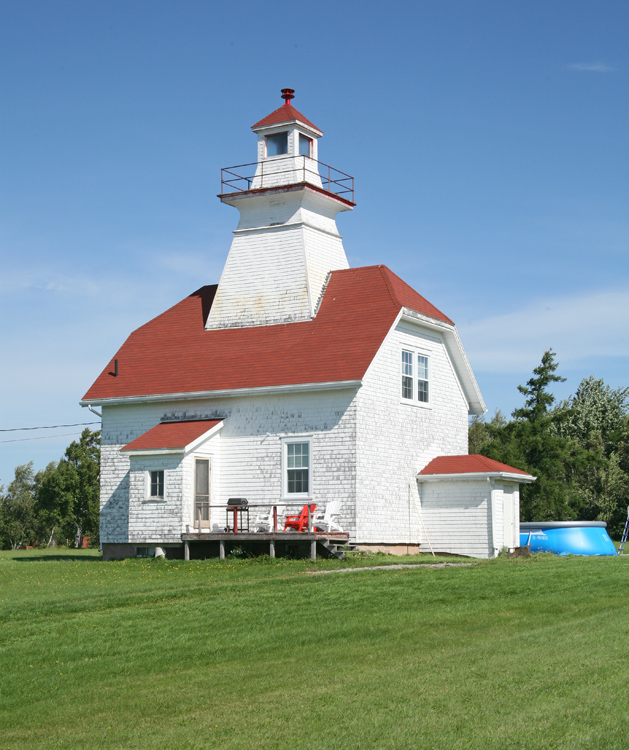 Wallace Harbour, situated at the mouth of Wallace River, is long, straight, and deep, and at one time was frequently used by vessels to haul products from the lumber mills and stone quarries located along Wallace River.

In 1873, H. W. Johnston, the Nova Scotia agent for the Department of Marine and Fisheries, reported on the construction of a lighthouse on Mullins Point: A small lighthouse has been built at Mullins Point, on the north side of the entrance to Wallace Harbor, in Cumberland County. It is a fixed white light, elevated thirty-nine feet above high water. The tower is a square wooden building, painted white, twenty-five feet high. The contract was given to Mr. Zebud Mullins, for $300. The light was first exhibited on the 1st August last, and is under the temporary charge of the builder.

Zebud Mullins was soon made the official keeper of the lighthouse. Authorities realized that a companion light could be used with Mullins Point Lighthouse to help vessels avoid Oak Island Bar and safely navigate the channel leading to Wallace Harbour. Keeper Mullins personal residence just happened to be properly aligned with the lighthouse, and he agreed to allow a red light to be exhibited from a window in his home to serve as the rear range light. For the use of his home and the extra effort required to maintain two lights, Mullins annual salary was raised from $100 to $150.

This arrangement worked well until Zebud Mullins passed away in 1892. The Annual Report of the Department of Marine and Fisheries for 1893 details the situation.

Tenders have been received for the necessary building, and a contract will immediately be awarded so that the new light may be in operation early next season. In the interval a temporary light from a pole has been maintained.

The still standing Mullins Point Rear Range Lighthouse, a combination dwelling and light tower, was the structure that was built in 1894 to serve as the rear range light and residence for the keeper. The tower, centered atop the one-and-a-half-story dwellings gabled hip roof, rises to a height of forty-eight feet and provided a focal plane of eighty-two feet for the rear range light. Daniel McDonald of Pictou built the structure at a cost of $1,507, which included relocating the oil house from the old site. The new rear light was placed in operation on August 25, 1894.

In 1884, the stone foundation under the front range tower was repaired, and galvanized-iron guy wires were attached to the tower to steady it during strong winds.

In 1965, the range lights were de-staffed after steel skeleton towers replaced the wooden range lighthouses. Mr. and Mrs. John E. Sproul purchased the combination dwelling/tower and moved it roughly 1.5 kilometres west along the shore from its original location in July 1966. Mullins Point Rear Range Lighthouse continues to be used as a private residence.

The combination dwelling/lighthouse used to exhibit the rear light at Mullins Point is the only one of this design that remains standing in the maritime provinces. A similar structure was built to serve as a rear range light on McNabs Island in Halifax Harbour, but that lighthouse no longer exists. Two lighthouses of this style can, however, be found on Ontarios Georgian Bay: Snug Harbour Rear Range Lighthouse and Jones Island Rear Range Lighthouse.

Mullins Point Rear Range Lighthouse was recognized as a heritage structure in 1990 and placed on the Canadian Register of Historic Places in 2007. The statement of significance used to nominate the lighthouse notes its unusual design:

The structure is of typical wood frame construction, but unique in design. The entire lighthouse is mounted on the hip gable roof of the keepers dwelling, rather than just the lantern. This arrangement was necessary to fulfill the rear range light function, which required that the rear light be located well inland of the front light on the shore and be raised up well above the level of the surrounding trees.

For a larger map of Mullins Point Range Rear Lighthouse, click the lighthouse in the above map.