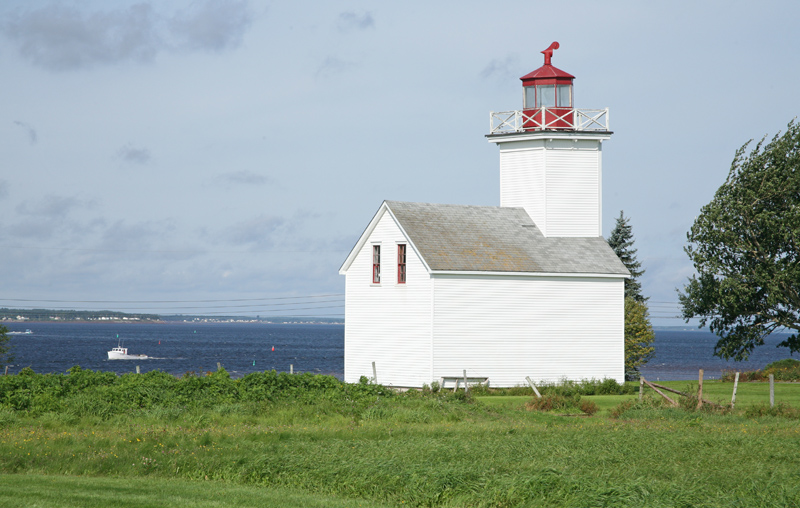 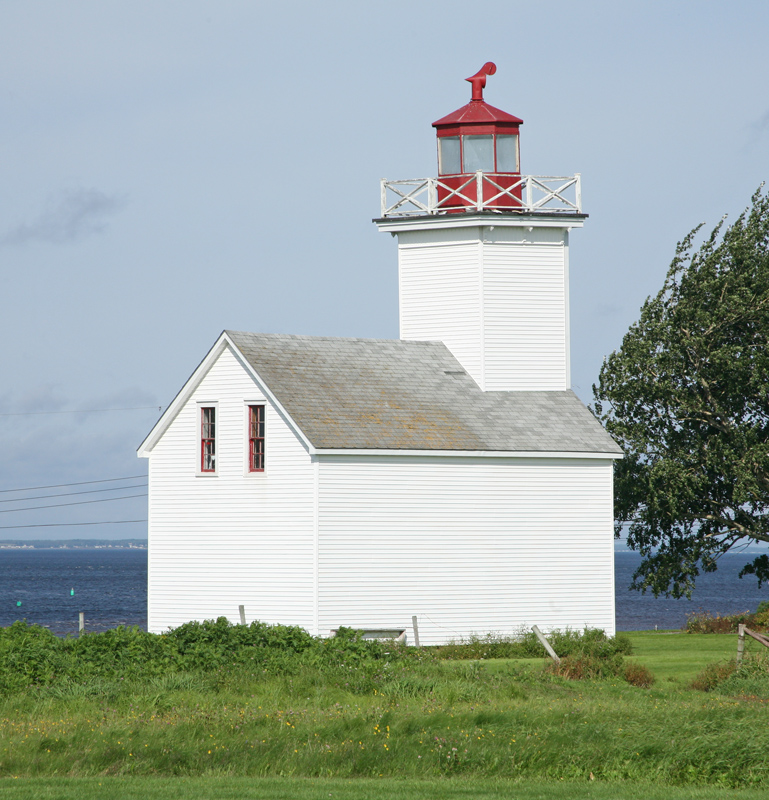 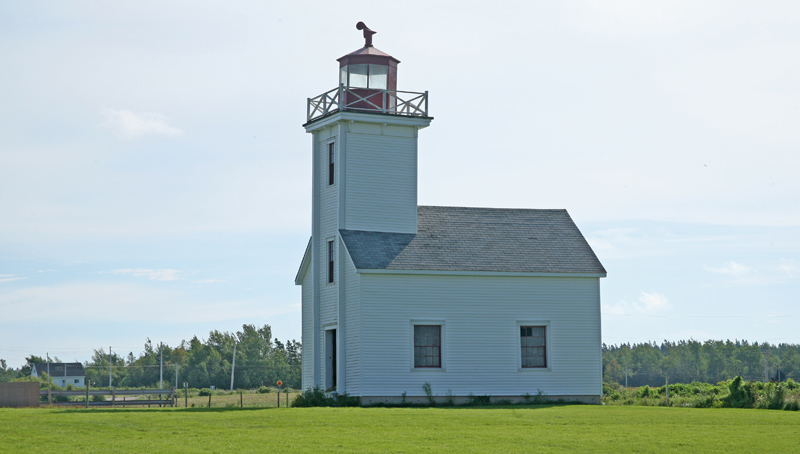 The village of Pugwash lies on Northumberland Strait and takes its name from the native Mi'kmaq word Pagweak, meaning Shallow Water, which refers to a reef near the entrance to the harbour. As a crooked channel through flats of sand and weeds leads to Pugwash Harbour at the mouth of Pugwash River, pilotage was historically encouraged.

In 1857 and 1859, inhabitants of Pugwash petitioned the provincial government for a lighthouse at the entrance to their harbour, but it wouldnt be until 1870, a few years after Confederation, that one was built. John B. Reed was granted a $1,195 contract to construct the lighthouse, which was built in a school-house or church-house design with a square tower rising from one end of the rectangular dwellings gabled-roof. Several lighthouses of this design were finished in Nova Scotia in 1871, including ones at Apple River, Ingonish Island, Main-à-Dieu, and East Ironbound Island. This style of lighthouse is not too common in Canada, but was frequently used in the United States. The first keeper appointed to mind the light was Rufus F. Bent, at an annual salary of $200.

Pugwash Lighthouse was placed in operation on August 1, 1871 on Fishing Point and served to mark the entrance to Pugwash Harbor and Pugwash River. An octagonal lantern room atop the tower showed a red light to seaward and a white light up the harbour.

Keeper Bent received certificates from several shipmasters on the efficiency of the red light. One certificate was from Captain Anderson of the British barque Sir G. McDonell, dated August 24, 1871, who stated that he saw Pugwash light at least twelves miles off and believed that, with a clear atmosphere, it could have been seen two miles farther. Red lights had a shorter range than white lights, as they had to pass through coloured glass. In this case, a clear chimney was used instead of a red one, and a red pane of glass was placed in front of the reflector, which was shown to be a better arrangement to produce a more powerful red light.

A new lantern room with a diameter of six feet instead of four-and-a-half-feet was installed atop the tower in 1881 to provide space for an improved lighting apparatus. In 1909, a fourth-order Fresnel lens was installed in the lantern room, and the characteristic of the light was changed from fixed to an occulting white light visible for 6 seconds and eclipsed for 4 seconds alternately.

The narrow point of land on which the lighthouse stood was often subjected to erosion and flooding. A stone revetment, about 350 feet long by three-and-a-half feet high, was built along the bank in 1878, and various measures had to be taken every few years to protect the point from erosion.

In 1953, Josh Allen accidentally discovered salt while drilling for water at his lobster factory in Pugwash. Six years later, the Canadian Salt Mine Company opened a mine whose shafts now reach a depth of a thousand feet and run mainly under Pugwash River. A processing plant at the mine produces salt blocks for farm use, refined salt for domestic consumption, and industrial grades of salt. The mine, which is the only underground mine left in Nova Scotia since the closing of all coal mines, produces around 1,200,000 tonnes of salt each year, which is distributed from a ship-loading facility in the harbor.

Around 1960, a new lighthouse with an enclosed upper portion and skeletal lower sections was built on the point, and the old Pugwash Lighthouse was sold to the Mundle family, who moved the structure to their nearby farm. This new lighthouse was the only one of its kind every built in Nova Scotia, though similar towers were used in other provinces, and it increased the focal plane of the light from forty-eight to fifty-seven feet.

Frank Millard, the last keeper of the light, served from 1939 to 1959, at which time Reginald Allen was hired to serve as a caretaker of the light at an annual salary of $150.

Cyrus Eaton was born in Pugwash, attended McMaster in Toronto, and then went to work for John D. Rockefeller, before branching out on his own and making a sizeable fortune in industries related to automobile manufacturing. In 1929, Eaton returned to Pugwash and contributed money to rebuild the core of the village, construct a seawall, and create a community park. Following World War II, Bertrand Russell and Albert Einstein, joined by several scientists, published the Russell-Einstein Manifest that championed nuclear disarmament. These intellectuals were seeking funding to hold a conference on this issue in a location free from government influence, when Cyrus Eaton agreed to finance the gathering if they agreed to hold it at his home in Pugwash. The attendees christened their first meeting, held in July 1957, the Pugwash Conference, and the organization continues to meet to this day in various locations as the Pugwash Conferences on Science and World Affairs. The group was co-recipient of the Nobel Peace Prize in 1995 for their efforts to diminish the part played by nuclear arms in international politics and in the longer run to eliminate such arms.

In 2017, the lantern room formerly atop the old Pugwash Lighthouse was sitting on the ground nearby, and it was apparent that the top of the tower had suffered extensive damage. On March 7, 2018, the local fire department used the old lighthouse, which was in poor condition, as fire control practice. Now, the lighthouse on East Ironbound Island is the only one of this design left in Nova Scotia.

Visitors to Pugwash today can view the Thinkers Lodge, where the first Pugwash Conference was held. The town is also known for its Gaelic heritage, which is clearly visible in the bilingual street signs and at the annual Gathering of the Clans held each year on July 1.

For a larger map of Pugwash (Old) Lighthouse, click the lighthouse in the above map.