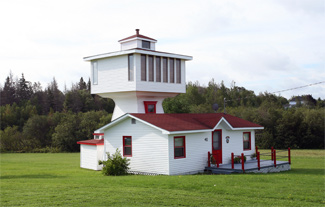 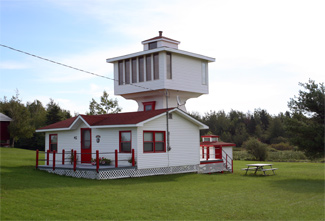 Wood Point, which was formerly known as Woody Point and Barnes Point, is situated along the eastern shore of Cumberland Basin, just south of Sackville, New Brunswick. In 1911, John A. Lea of Sackville was contracted to build a 27-foot high square wooden tower, with sloping sides, surmounted by a square wooden lantern for $983.

The following Notice to Mariners was published to advertise the establishment of the light:

A lighthouse has been established by the Government of Canada on Barnes (Woody) Point, Cumberland Basin, south coast of New Brunswick.

The lighthouse tower is an enclosed wooden building, square in plan, with sloping sides, surmounted by a square wooden lantern, the whole painted white. The height of the building from its base to the top of the ventilator on the lantern is 27 feet.

The early keepers of the light also had the name Barnes, with C.W. Barnes serving as the first keeper, and Willard Barnes taking charge of the light in 1915.

After the Coast Guard deactivated the light in 1976, the tower was sold and relocated to Nova Scotia, where it was greatly modified and incorporated into a summer residence near Amherst Shore.

For a larger map of Woody Point (Barnes Point) Lighthouse, click the lighthouse in the above map.

Just east of Amherst Shore and opposite a grocery store, turn north onto Aggermore Point Road, and you will find Woody Point Lighthouse on your right.