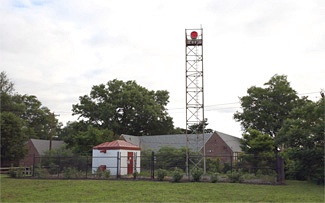 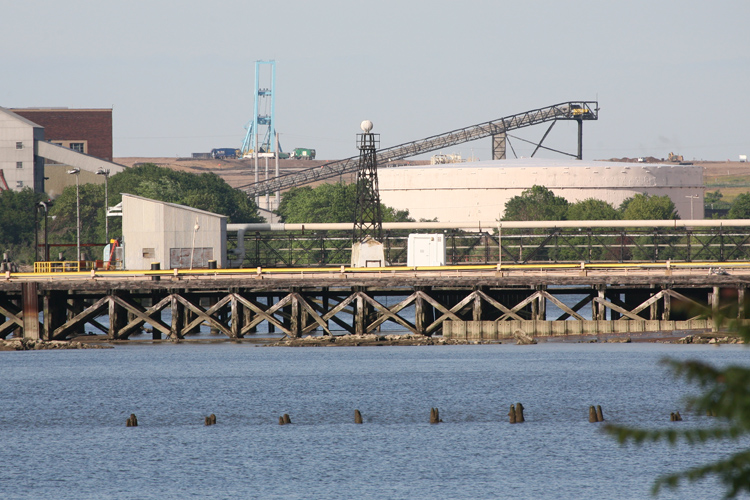 The western shore of Delaware River just north of Christiana River and south of Edgemoor was formerly a low-lying, marshy area known as Cherry Island. Though the name remains the same, the area has changed dramatically through the years as first dredge spoils were placed on the swampy land, and then in 1985 Cherry Island was selected as the site for a landfill. By 2003, the layer of waste had grown to a thickness of seventy-five feet, and over the next several decades it could reach a maximum height of 290 feet above sea level. Long before Cherry Islands profile was so drastically altered, the Lighthouse Board recommended the construction of a light or lights in 1875 to guide mariners around a bad shoal at this point in Delaware River. The Annual Report of the Lighthouse Board for 1878 contains the following information on the proposed lights:

An appropriation of $10,000 was made by act approved June 20, 1878, for a light or lights to guide past Cherry Island flats. It is impossible that this sum will do more than enable the board to decide how the object can be best attained, that is, whether range-lights or a light on the shoal should be built. This question can only be answered by a survey, which is now being made. If range-lights cannot be used, and it becomes necessary to build on the shoal, the structure will not cost less than $100,000, possibly more. If range-lights can be used they will be more effective and will probably not cost more than $50,000, exclusive of the sites. An appropriation of $50,000 for carrying on this work should be made. This amount will be required for range-lights, and will be sufficient to make a beginning in case the board is compelled to place a light on the shoal.

Through a survey of the shoal, the Lighthouse Board determined that range lights would be adequate to guide vessel traffic through the area, and appropriate sites for the lights were selected near Duponts power-wharf. Once funding for the range was obtained, work progressed rapidly, and the lights were exhibited for the first time on April 1, 1880.

The site for the front range light was a three-acre, riverfront parcel sold to the government by Edgemoor Iron Company on July 2, 1879 for $3,000. The Lighthouse Board also built Edgemoor Lighthouse Depot for its fourth district on the same property, and it was on the depots pier that the original Cherry Island Front Range Light was placed. The light was shown from a white tower, which stood twenty-one feet tall from its base to the center of its red lantern. A fog bell, which was struck by a Stevens striking-apparatus and which had previously been used at Delaware Breakwater West End Lighthouse, was also located in a tower farther out on the pier.

William W. Simmons was the first keeper to take up residence in the stations one-and-a-half-story house, located just 200 feet from the pier light. A brick-lined oil room and cistern, for respectively storing fuel and rainwater, were located in the cellar beneath the dwelling. Keeper Simmons received $500 per year during the decade he served at the station.

The site for the rear range light was 1,456 yards north of the front light on a small rise overlooking the river. A handsome, two-story dwelling was built for the keeper with a veranda running along its front and a square tower, topped by a pyramidal roof and ventilator ball, jutting up an additional story from one corner. The rear light was exhibited from an elevation of 120 feet above sea level.

The first keeper to call the structure home was John A. Patterson, who served at the station from 1880 until 1910. His annual salary remained stuck at $500 until the final two years of his tenure, when he was paid an additional $6.

A well was dug and equipped with a cucumber pump to supply water to the front station in 1883, but an attempt two years later to provide a well for the rear station failed. A four-inch iron pipe was driven to a depth of thirty-six feet, where it struck rock, forcing the effort to be abandoned. Another attempt at sinking a well for the rear station proved successful in 1891.

In 1930, Julian Bacon was transferred to Cherry Island Rear Range Lighthouse after having been in charge of Elbow of Cross Ledge Lighthouse for several years. Julians father was a lighthouse keeper on Delaware Bay, and in 1897, Julian married Maria Burton, the daughter of Theodore H. Burton, keeper of Mahon River Lighthouse. As Julian was not allowed to have his family with him at his offshore station, Maria continued to live with her parents at Mahon River Lighthouse, where in 1900, Mary Adelaide Bacon was born to Julian and Maria. When Julian Bacon moved into Cherry Island Lighthouse in 1930, he was accompanied by his wife, his daughter, and Lydia Burton, his mother-in-law. Keeper Bacon's stay at Cherry Island Range was less than a year, as in December 1930, he was transferred to Marcush Hook Rear Range from where he retired in 1933 after an electrical system was installed in the lighthouse.

As other lights were automated along Delaware River, Cherry Island Rear Range Light retained its keeper, but his responsibilities grew to include several other lights in the area. The February 15, 1953 edition of the Wilmington Sunday Star contained an article on Cherry Island Rear Range Lighthouse entitled Gaslight Gone But Old Lens Serves. The reporters visit to the station definitely altered his idea of lighthouse life, and likely did the same for many a reader of the paper as well.

When we thought of them at all, we usually pictured lighthouses in melodramatic settings  lonely towers, rising on rockbound coasts, collared by ranging surf, with the lighthouse keeper, a feeble old man, tending his beloved light day and night.

But we were forced to overhaul our entire thinking about lighthouses last week after visiting a local one, which we found neither lonely, rockbound, nor surf-encompassed. The keeper, far from being feeble or old, is in his prime, and he had better be because he has under his charge a wife and five youngsters, all enthralled with life in a lighthouse, plus 15 lights, stretched along the Delaware River.

Arthur W. Davis, Chief Boatswains Mate for the Coast Guard, was the keeper serving at the range light at that time. Together with James P. Kelly, who resided with his family in the nearby Marcus Hook Range Light, Davis was responsible for the automated lights from Cherry Island south to Reedy Island Rear Range Lighthouse near Taylors Bridge. Davis described their duties to the reporter:

Takes us about three days to make a round-trip by jeep. At each light we check relays, emergency batteries, shine the lenses and storm panes. Need the jeep because some of the lamps are in the wilderness practically. Were also charged with the upkeep of the lighthouse properties, which means, among other things, we have 15 acres of grass to mow in the summer. This, believe me, can leave one feeling very landlubberish.

Regrettably, very little remains at the site of the both the front and rear Cherry Island Range Lights. The keepers dwelling at the front range was destroyed by fire on August 8, 1891, and although a replacement was completed it too is no longer standing. A fire broke out at Edgemoor Depot near the front range light in 1925, destroying the depots warehouse. One casualty of that fire was a first-order Fresnel lens being stored at the depot after it had been removed the previous year from the discontinued Cape Henlopen Lighthouse. A DuPont Company plant now occupies the land where the depot and dwelling for the front range light formerly stood. A modern range light is located atop a skeleton tower near the plants southern pier.

Cherry Island Rear Range Lighthouse remained standing until 1970 or 1971, when the Coast Guard decided to tear the historic structure down rather than attempt to refurbish it or have someone move it from the site. All that remains at the location today is a historic oil house, built in 1897, and a skeletal tower supporting a red light.

For a larger map of Cherry Island Range Lighthouse, click the lighthouse in the above map.

From Interstate 495, take Exit 4 and proceed to Governor Printz Boulevard, also known as Highway 13, which parallels Interstate 495 on its northern side. Turn right onto Governor Printz Boulevard. After 0.5 miles, turn left onto Lore Avenue and then turn right onto River Road after 0.4 miles. From River Road, turn right after 0.3 miles onto Riverside Drive. After Riverside Drive turns left, turn right into a parking lot, at the end of which you will find Cherry Island Rear Range Light.