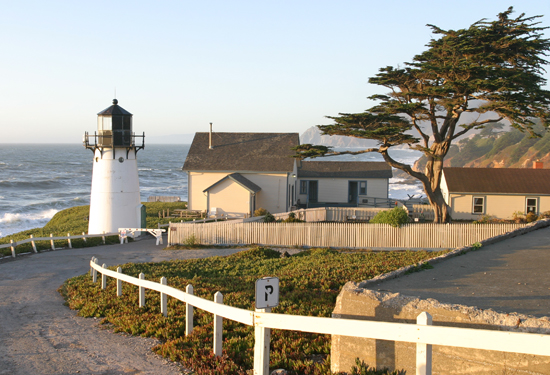 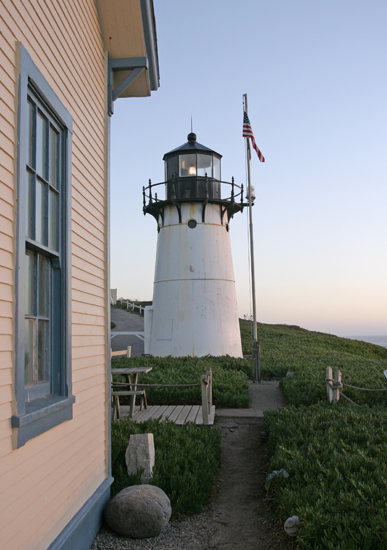 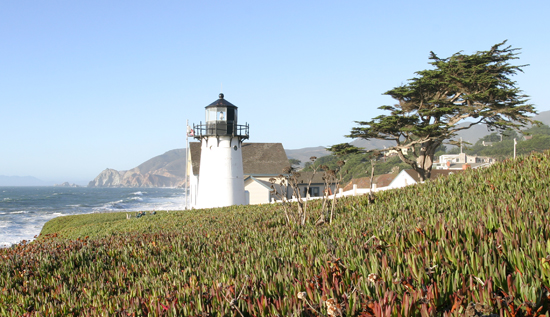 Many have heard of the following remark, attributed incorrectly to Mark Twain: The coldest winter I ever spent was a summer in San Francisco. While the coast near San Francisco is not really subject to the arctic temperatures Twain complained of, the climate is conducive to heavy fog, and heavy fog, as every mariner knows, is conducive to shipwrecks. For years, vessels caught in the pea-soup fog along the final approach to San Francisco Bay were forced to hug the coast, putting them in danger of the rocky outcroppings that provide beautiful vistas to sightseers, but prove deadly to boats. Although by the mid-1800s almost ninety vessels had met the business end of the jagged rocks off Montara, it wasnt until two high profile incidents in 1868 and 1872 that Congress was finally propelled into action. On November 9, 1868, the Colorado, a large Pacific Mail steamship carrying hundreds of passengers and the U.S. mail, ran aground on the unseen shoals off Point Montara. Although the ship eventually floated free and all the passengersand the mailsurvived, the near disaster left its mark on public sentiment. The ledge where the ship had run aground, formerly called Uncle Sam, became known as Colorado Reef. Four years later, another ship caught on Colorado Reef was not as lucky. On October 17, 1872, the British sailing ship Aculeo collided with the rocks after being lost for more than three days in blinding fog. As the ship cracked open and filled with water, the crew made its escape in lifeboats. For over a week, the abandoned ship was pounded by waves before a salvage crew could get to it.

Work at Point Montara began in October 1874. The stations two-story keepers dwelling, built in the Victorian Gothic style common to the day and reminiscent of many New England keepers dwellings, was completed the following February, and the fog signal was placed in operation on March 1, 1875. Point Montaras twelve-inch steam whistle emitted a five-second blast that could be heard up to fifteen miles away. The whistle didnt come cheapit took between 150,000 and 200,000 pounds of coal to fuel it every year, depending on the number of foggy days. A hydraulic ram was used to force the needed water from a creek that ran through the reservation into a 2,000-gallon reservoir in the signal-house.

The fog signal wasnt enough to prevent continuing disasters along that stretch of coast. Four years to the day after the Aculeo was impaled on Colorado Reef, the three-masted Welsh ship Rydal Hall crashed in the fog onto Frenchmans Reef. Only twenty-one members of the thirty-man crew survived, and the cargo was a total loss. Salvage was impossiblethe broken ship languished almost a month on the rocks before cracking apart, meanwhile spilling tons of coal into the water and onto the beach. Further wrecks of ships carrying railroad iron and lumber littered the rocky coast as more vessels met their ends against the rocks. The captain of one schooner, the Ada May, mistook the Montara fog signal for the one at Point Bonita to the north, and thought he was entering the Golden Gate when he pummeled onto the rocks at Montara.

The fog signal building was enlarged in 1881 to house a duplicate fog-signal, and a barn and stable were added to the station in 1884. A twelve-foot-high sounding board that extended over three-quarters of the length of the signal-houses roof was placed in back of the whistles in 1897 to focus the sound seaward.

In 1900, the government installed a kerosene lens lantern on a post 300 feet southwest of the fog whistle, and the resulting red beam could be seen up to twelve miles. Two years later, the original fog signal was pulled down and replaced by a one-and-a-half-story, wood-framed structure built atop a concrete foundation. Its design was typical of other fog-signal buildings of the period, and, except for a few minor cosmetic changes, it looks the same today as it did when it was built. The steam fog signals were torn out in 1919 and replaced by a diaphone fog signal, powered by thirty-horsepower gas engines connected to air compressors. This more efficient fog signal commenced operation on January 24, 1919.

The humble lens lantern was finally upgraded on June 15, 1912 to a fourth-order Fresnel lens set atop a white pyramidal skeletal iron tower. The illuminant was changed at this time from oil to incandescent oil vapor. The characteristic was changed from fixed red to a white light that was visible for two-and-a-half seconds and then eclipsed for the same amount of time, and the lights power was increased from about 42 to 3,200 candlepower. The candlepower was increased to 25,000 in 1919, but the biggest change came in 1928 with the arrival of a new lighthouse tower. While its conical shape is similar to other California lighthouses, the bolted, metal-sided frame is unique in the state.

This metal tower first saw service from 1881 to 1922 at Mayo Beach on Cape Cod. For years, it was believed that the Mayo Beach tower had been destroyed after the light was discontinued in 1922, but while conducting research for a lighthouse book, Colleen MacNeney came across a 1928 photograph of a tower in Yerba Buena, California with the following inscription: This tower formerly used at Mayo Beach, 2d District. This discovery prompted MacNeney to dig deeper, and she eventually found correspondence in the National Archives proving that the Mayo Beach tower was sent from Massachusetts to Yerba Buena in 1925 and then eventually erected at Point Montara. Standing only thirty feet high, the lighthouse is short by most standards, but good for keeping the beam beneath the fog.

Not much is known about the lives of Point Montaras head keepers and assistant keepers, and what little was captured in local newspapers isnt flattering. Henry Hall, whose real name appears to have been Neils. H. Hald, served as head keeper from 1895 to 1908. A newspaper item in January 1909 explains what ended the forty-one-year-old keepers career: Neils Hall, the light house keeper at Point Montara, who pleaded guilty to criminal assault in the superior court, today was sentenced to 10 years at San Quentin by Superior Judge Buck. When sentence was pronounced the prisoner broke down and wept like a child. The crime for which Hall was sentenced was committed upon his 15 year old stepdaughter.

Herbert Luff served as assistant keeper at Point Montara from 1892 to 1901, and then returned in 1928 and served five more years before retiring in 1933. Between his two stints at Point Montara, Luff served as head keeper of the lighthouses at Ano Nuevo, Point Loma, Yerba Buena, and Punta Gorda. After his first wife died in 1929, Keeper Luff remarried, but his new bride died in November 1930 at Point Montara, just two months into the marriage. In March 1931, Luff married twenty-three-year-old Lila Adeline Jones, a woman forty years his junior whose family he had met while serving at Punta Gorda. Two days after his third wedding, Luff reported his bride had been kidnapped, but in reality she had willingly run off with a truck driver who was a childhood sweetheart. It was lonely at the lighthouse and he tried to boss me around, claimed Jones. I thoughtId rather be an old mans darling than a young mans slave  but I changed my mind.

Point Montara saw some changes during World War II, when it was used to house military units, including the K-9 Corps and a mobile artillery unit, but the 1970s ushered in a new life for the lighthouse. In 1970, the foghorn was replaced by an off-shore horn buoy and the light was automated, and the original Fresnel lens was removed to the San Mateo County Historical Society Museum, where it is still on display. As lighthouses along the California coast were automated, the keepers cottages had little value and the Coast Guard decided to tear down most of the dwellings. Fortunately, the State of California developed a plan in 1975 to transform a few vacant lighthouses into youth hostels, with Point Montara as a prime candidate. Not surprisingly, red tape slowed down the project, with the Coast Guard offering only a short-term lease and the state hesitant to invest much money without a long-term lease. Eventually the two parties reached an agreement on a long-term lease, and in 1978 the California legislature appropriated $1.9 million for the creation of nine hostels.

The restoration and conversion of both Point Montara and nearby Pigeon Point Lighthouse were conducted simultaneously and ended up needing more funds than the state had allotted. Various organizations offered financial assistance: AYH staff and volunteers provided $45,000 worth of labor; the California Department of Parks and Recreation contributed more than $100,000; the California Coastal Conservancy donated money, and even local businesses and banks made contributions.

The finished product was worth the effort. The Victorian keepers dwelling at Point Montara was renovated and now houses the staff for Point Montara Hostel. Two kitchens, a dining room, and bedrooms for the guests are located in Coast Guard housing built adjacent to the original dwelling, and the fog signal building has been renovated to provide two dorm rooms and a large common room. The hostel opened for visitors on July 15, 1980.

Now, visitors to Point Montara can not only view the lighthouse, but also act out their fantasies of being lighthouse keepers by sleeping in the fog signal building. When the coast isnt blanketed in fog, the view is spectacular, and the coastal setting is quite romantic.

For a larger map of Point Montara Lighthouse, click the lighthouse in the above map.

On Highway 1, seven miles north of Half Moon Bay and one-half mile south of Montara, look for American Youth Hostel signs on the west side of the road which will take you to the lighthouse. The hostel grounds are open from 9 a.m. to sunset. The hostel requests that you stop by the office before visiting the grounds. For reservations at the hostel and further information, call (650) 728-7177.

The tower is owned by the Coast Guard, and the grounds are managed by California State Parks. Grounds open, tower closed, fog signal building and Coast Guard dwelling open to guests.


It might be a bit odd to pay for accommodations when you have your own or a friend to stay with nearby, but we decided a stay at Point Montara might make for a memorable experience. We spent the night in the fog signal building, which besides the keeper's dwelling that is reserved for hostel staff, is the most historic structure on the premises. The fog signal building masquerades as a motel in the movie Bandits. The Sleepover Bandits and their housewife-accomplice spend the night at the "motel," and are shown lighting fireworks on the bluff just north of the fog signal building.