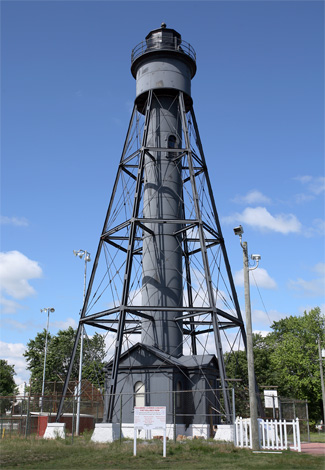 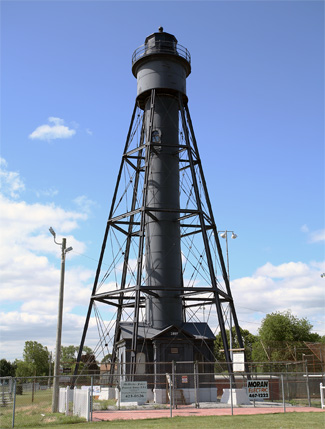 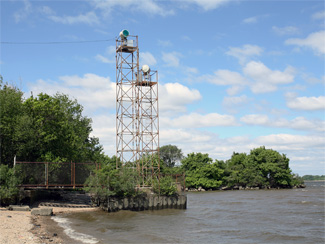 The first sets of range lights built along Delaware River were named after the location where they stood, like Finns Point, Deepwater Point, and Port Penn, but when additional ranges were constructed a few years later, they tended to be named after the features of the channel through which they guided vessels, like Schooner Ledge, Fort Mifflin Bar Cut, and Tinicum Island.

People whizzing across Tinicum Island today on Interstate 95 would likely be surprised that this piece of land just west of Philadelphia International Airport is actually called an island, and they might be equally surprised to learn that Tinicum Island was once the capital of New Sweden. In 1638, newly arrived Swedish settlers purchased land along this stretch of Delaware River from Native Americans for their new home. Governor Johan Printz arrived in 1643, built himself a spacious residence named Printzhoff complete with a log sauna, and made Tinicum Island the capital of New Sweden. The island served in this capacity until the more numerous Dutch took control of the area in 1655.

In 1880, the Lighthouse Board set out to build four additional sets of range lights along Delaware River, one of which would be Tinicum Island Range. These lights when completed, wrote the Lighthouse Board, will in connection with the range lights now lighted mark the channel perfectly between Ship John Shoal and League Island (near Philadelphia). Tinicum Range was somewhat unique as its front light was co-located with the front light of Fort Mifflin Bar Cut Range. These two sets of range lights both marked the reach passing Tinicum Island and the channel dredged across Fort Mifflin Bar, but faced in opposite directions with Tinicum Range serving upriver traffic and Fort Mifflin Range serving downriver traffic.

An attractive six-room dwelling with a tower attached to its front was built on the slope of the riverbank to serve as the front ranges, and lamps shining through two fifth-order range lenses, one produced by Barbier & Fenestre and the other by Henry-Lepaute, were used to produce constant white lights. On October 31, 1894, the characteristic of Tinicum Island Front Range Light was changed to two seconds on and one second off through the installation of a cylindrical sleeve that was raised and lowered around the lamps by clockwork machinery powered by a suspended weight.

Tinicum Rear Range Light was exhibited from the top of a steel skeletal tower that stood eighty-five feet tall and 5/8 of a mile from the front light. A cylindrical tube houses a spiral staircase that leads from the unique neoclassical iron pavilion at the base to the watchroom, located in the enlarged section immediately below the lantern room. The supports for the tower are arranged in a hexagonal pattern about the central column and are anchored by stone piers sunk 4 ½ feet in the ground. Tinicum Island Range Lights were activated on New Years Eve 1880, with Joseph H. Preston serving as keeper of the front light and Benjamin D. Hannold as keeper of the rear light.

The keepers dwelling for the rear range stood about twenty-three feet north of the tower on a stone wall foundation. Rainwater was collected from the roofs dwelling and funneled into a 3,700-gallon cistern located in a cellar. Additional water was available from an open well located beneath the seven-room dwelling.

Both the front and rear Tinicum Range Lights were modified over the years to improve their functionality and to deal with a shifting river channel. In 1883, the color of the dwelling at the front light was changed from drab to white to make it more conspicuous as a daymark, and an open lattice-work painted white, with a conical-shaped summit, formed by a stanchion on each side of the lantern, 15 feet above it, was placed over the top of the lantern as an additional day-mark. A detached frame tower, located about fifty feet east of the front range dwelling was constructed in 1887, and on August 15 of that year, the lights were transferred to the new tower, which could be accessed from the dwelling via an elevated walkway. The range lights were realigned yet again in 1908, when a new tower was built on a cement pier just offshore from the dwelling. This tower looks quite similar to the one built in 1887, so it is possible that the 1887 tower was simply relocated. An elevated walkway led to this tower as well, and a 2,000-pound fog bell was suspended from its front face. The bell, forged by Gamewell Fire Alarm and Telegraph Company of Boston, was struck a double blow at thirty seconds intervals by machinery that had to be wound every three hours and forty-five minutes.

The Annual Report of the Lighthouse Board for 1882 describes an alteration made to improve the visibility of the rear tower during daylight: A prominent day-mark was placed on the top of the iron tower, consisting of an iron disk, 4 feet in diameter, with open horizontal spaces, placed on top of a staff. The height of the disk above the roof of the lantern is 17 feet. The staff is placed on the lantern gallery, back of the lantern, on range, and the whole affair is painted black. The 1897 Annual Report mentions that the high day mark was renewed and raised 25 feet above the top of the tower to show above interfering trees. To further improve visibility, slatted frames were placed on the two supporting legs that stood perpendicular to the range in 1901.

As the poplar trees in Lincoln Park continued to grow taller and obstruct the rear range light, the board decided it was easier to trim the trees than raise the tower, and permission was obtained in 1903 to lop off the top thirty feet or so of the interfering trees.

In 1890, the rear light was listed as a fixed red light of the 5th order exhibited at a height of 109 feet above sea level and visible for 8.5 nautical miles. As Tinicum Island Range intersected Schooner Ledge Range downstream, Tinicum Rear Light was eventually changed to show a fixed white light with a red sector to mark the turning point between the two ranges. Today, the light is a fixed red light with a strength of 500,000 candlepower.

Clyde Harrison recalls living at Tinicum Island Front Range Light with his father, also named Clyde, who served as keeper, and his mother, Meta. Before being transferred to Tinicum Island, Keeper Harrison had served at Elbow of Cross Ledge Lighthouse in Delaware Bay. The Harrisons relocated from Lewes, Delaware to their new home at Tinicum Front Range in the early to mid-1940s, and Keeper Harrison tended the range lights and other minor navigational aids in the area until his passing in February 1965.

Young Clyde recalls that living by the oil refinery that by then stood adjacent to the front range light had both advantages and disadvantages. The refinery generously supplied the Harrisons with free electricity, and they also provided free oil  in their drinking water. After the Harrisons noticed that the water taken from the stations well had started to taste a bit funny, a sample was given to refinery officials, who quickly realized that an underground leak was contaminating the groundwater.

The neighboring refinery placed loads of manure around their above ground pipelines in winter to prevent them from freezing, and come spring, Keeper Harrison had an abundant supply of free manure, which he used to produce a garden that impressed many a visitor. As the dwellings tower no longer housed the range lights, it was converted into a bathroom  a bathroom with a view. The towers large windows afforded bathroom occupants an expansive view both up and down Delaware River.

Tinicum Rear Range Lighthouse was automated in 1933, but John Birch, its last keeper, continued to live at the light as a custodian until 1945. The residence at the rear range light was removed sometime in the 1950s after it had fallen into disrepair. The dwelling at the front range light lasted a while longer. When a keeper was no longer needed at this light, the Coast Guard used the home on the riverbank for various Coast Guard personnel. By the early 1970s, however, this dwelling was showing its age. A local historical group pushed for restoration of the structure, but the Coast Guard opted for tearing it down due to the high price tag of a major renovation.

A sports complex, consisting of three baseball diamonds and a soccer field, now surrounds the rear range light. Perhaps this is fitting, as a baseball team is also part of the history of Paulsboro/Billingsport. The All-Thompson baseball team, composed of the Thompson brothers who all lived in Paulsboro, started playing with virtually no equipment; the catcher even caught with his bare hands. From humble beginnings, they went on to play against the Cuban Stars and were invited to give exhibition games at the Chicago Worlds Fair.

For a larger map of Tinicum Rear Range Lighthouse, click the lighthouse in the above map.

The lighthouse is owned by the Coast Guard and leased to the Borough of Paulsboro. Grounds open, tower open during tours.


There aren't too many of these skeletal towers open to climbing, and we just lucked into an opportunity to climb this one. During a visit to Tuckerton Seaport, we stopped into the decoy carving shop and struck up a conversation with Ray Miller, who was carving there that day. Somehow we transitioned to the topic of lighthouses, and Ray mentioned that he was a member of the Tinicum Rear Range Lighthouse Society. Graciously, he offered a personal tour of the tower the next day, as we were going to be in that area. Besides carving shore birds, Ray has also painted several lighthouses in New Jersey, including of course, Tinicum Rear Range Light.