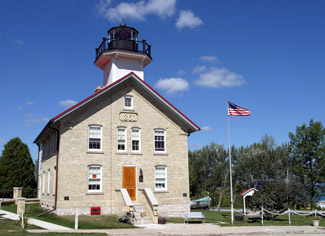 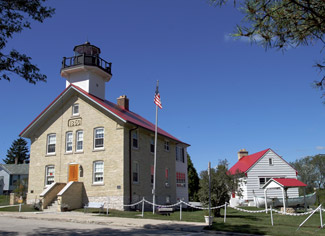 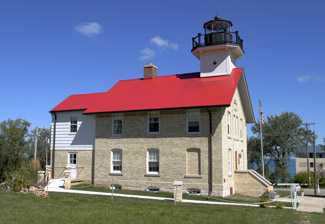 The first white settlers arrived at Port Washington on September 7, 1835, under the direction of Wooster Harrison, and during that fall, they laid out a town at the mouth of the Sauk River. The town was originally known as Wisconsin City, but as there was already another settlement in the territory with that name, the name was changed to Washington City. Harrison resided in the new village until 1837, when he and the other settlers, many of whom had hoped to profit on land speculation, left during the financial crisis that swept the country. Harrison returned in 1843, reclaimed his home, and helped develop the city he had founded. In 1844, the name of the village was changed to Port Washington, with the hopes of it becoming an important harbor on Lake Michigan.

The first memorial presented to Congress for a lighthouse at the mouth of the Sauk River was in 1837, but due to the abandonment of the settlement, the cause was not picked up again until 1844, when a resolution backed by the House of Representatives of the Territory of Wisconsin was sent to Washington. Various representatives from the territory presented petitions for a lighthouse in 1845, 1846, and 1847, before Congress instructed the Committee of Commerce in January 1848 to inquire into the expediency of making appropriations, at the present session, for the erection of a light-house at Sauk harbor.

Congress appropriated $3,500 for a lighthouse at Port Washington in 1848, and that October a parcel of land on the north bluff overlooking Lake Michigan was purchased from Henry Genevieve Allen for $200. Built in 1849, the first Port Washington Lighthouse consisted of a conical brick tower that tapered from a diameter of twelve feet at its base to six feet seven inches at its octagonal lantern room, which originally housed five lamps set in fourteen-inch reflectors. The tower had a height of thirty-two feet, base to ventilator ball, but the bluff gave it a focal plane of 109 feet. A rectangular, one-and-a-half-story brick dwelling was located near the tower, and Cyrus B. Worth was employed as the first keeper. The total cost for the lighthouse and keepers dwelling was $3,380.60.

In July 1850, Henry B. Miller, Superintendent and Inspector of Lights on the Great Lakes, noted the following on Port Washington Lighthouse and its keeper: The tower has thus far stood the effect of the weather, and is in good order. The dwelling is very small; and to enable the keeper to finish two chambers above, I would respectfully recommend that $75 be appropriated towards this object. Conduct of keeper good.

After the Lighthouse Board was established in 1852, the system of lamps and reflectors, used in most of the lighthouses in the United States at that time, was replaced by the more efficient Fresnel lens. A sixth-order Fresnel lens was installed in the lantern room at Port Washington in 1856.

Like many lighthouses built under contract for the lowest possible cost while Stephen Pleasonton was in charge of the countrys lighthouses, the first Port Washington Lighthouse had a rather short life. In 1859  60, the lighthouse was rebuilt. While material from the first lighthouse was reused, the new lighthouse certainly had a different design. Instead of being detached from the dwelling, the new tower was placed atop the southern gable of the new two-story keepers dwelling, which was built of cream city brick.

To support the lantern, eight-inch-square beams rose from the attic as part of a square tower, whose weight was supported by bearing walls in the first and second floors of the dwelling and eight-inch-square beams in the basement that stood atop brick piers. The lantern room was accessible via a stairway in the southwest corner of the first floor and a series of three ladders that ran from the second floor to the attic, the attic to the watchroom, and the watchroom to the lantern. The sixth-order lens from the first tower was used in the lantern room of the new lighthouse until 1870, when a more powerful fourth-order Fresnel lens was installed.

Bernard Schommer was in charge of the lighthouse from 1857 until his death on January 11, 1860. Margarethe Schommer replaced her husband as keeper and was the first keeper to take up residence in the new lighthouse. At the time she moved in, thirty-six-year-old Margarethe, who had been born in Luxembourg, had seven children, ranging in age from eleven to two.

Fauntleroy Hoyt was appointed keeper of the lighthouse in August 1861 and was keeper at the time of the draft riot at Port Washington in November 1862. The areas Catholic farmers from Luxembourg felt William Pors, the local draft commissioner, who was a German Protestant and a Mason, was exempting his Republican and Masonic friends from service. As Pors prepared to draw names for the draft, an angry crowd of over 200 farmers marched up to the courthouse in Port Washington, threw Pors down the courthouse steps, and then pelted him with stones as he fled for his life.

Governor Salomon dispatched six companies of the Twenty-eighth Wisconsin Regiment who sailed up Lake Michigan from Milwaukee and surrounded Port Washington. Over 130 rioters were captured and eventually taken to Camp Randall in Madison, where they remained in custody for about a month.

Charles H. Lewis, a former whaling captain, began serving as keeper of Port Washington Lighthouse in 1874. Upon his death in 1880, his son, Charles Jr., was placed in charge of the light. Charles Lewis, Jr. lived at the lighthouse until 1934, and during this time numerous changes occurred at the station. In 1888, piers were completed in the harbor, and in 1889 a square, pyramidal tower was erected on the north pier to guide mariners into the anchorage at Port Washington.

Keeper Lewis was now in charge of two lights, and to help with the extra duties, George Rathbun was appointed the stations first assistant keeper in 1889. On December 27, 1892, Keeper Lewis wrote the inspector: I have a complaint to make against my Assistant, the trouble is caused by his habit of frequenting salons &  coming to the station considerably under the influence of liquor. When I told him  that he violated the rules & that such conduct could not be tolerated, he did not seem to consider it of much importance 

In 1894, a brick oil house was constructed for storing the more-volatile kerosene that was being used in the lights. A new pump for the stations well was also supplied that year, a cement sidewalk was laid between the dwelling and the woodshed, and the stations damaged fourth-order lens was replaced by a new apparatus of the same order. A 225-foot-long fence with steel posts, pickets, uprights, a foot gate, and a carriage gate was put in place in 1899, and six loads of gravel were placed on the road through the lot to the barn.

When work on Port Washington Breakwater Lighthouse began in 1934, Keeper Lewis moved out of the dwelling so it could be remodeled to house the personnel responsible for the new light and fog signal. The lantern room and tower were removed from atop the dwelling at this time, and the original purpose of the brick structure slowly started to be forgotten. After the breakwater light was automated in 1976, coastguardsmen continued to live in the dwelling until the station at Port Washington was eliminated in 1992. The old lighthouse was leased in 1993 to the Port Washington Historical Society, which began using the building as a museum. The society received ownership of the old lighthouse in 1997, and a year later the structure was placed on the National Register of Historic Places.

During the summer of 2000, Georges Calteux, minister of sites and monuments for Luxembourg, toured the museum during a visit to Ozaukee County, which is home to many residents with Luxembourg roots. Inspired by the societys efforts to restore the lighthouse, Calteux offered to have a replica tower and lantern room built in appreciation for the U.S. servicemen who liberated Luxembourg during World War II. This generous gesture got the society scrambling to raise money, solicit volunteers, and draw up plans for a thorough restoration of the lighthouse. Fulfilling his promise, Calteux had the replica lantern and tower built in Luxembourg and then delivered to Port Washington in March 2002. The tower was installed in April, and a dedication ceremony was held at the lighthouse on June 16, 2002.

Georges Calteux was present for the dedication along with Madame Erna Hennicot-Schoepges, minister of culture and higher education for the Grand Duchy of Luxembourg, and Troaterbattien, a thirty-piece band from Luxembourg. Representatives from the United States included Lt. Governor Margaret Farrow, U.S. Representative F. James Sensenbrenner, and Port Washington Mayor Mark Gottlieb. Five dignitaries were hoisted up in the basket of a local fire truck to cut a red ribbon that encircled the lantern room.

On October 7, 2007, a fourth-order Fresnel lens custom made by Artworks Florida was installed in the lantern room as the final piece in the restoration of the 1860 Port Washington Lighthouse.

For a larger map of Port Washington Lighthouse, click the lighthouse in the above map.

From Interstate 43 west of Port Washington, take Exit 96 and travel east on Highway 33 for 3 miles. The road will become Grand Avenue along the way. Turn left on Franklin Street and drive 0.4 miles to Woodruff Street. Turn right on Woodruff and then make an immediate right on Catalpa Street. Follow Catalpa Street to Johnson Street and turn right. Port Washington Lighthouse will be down the street on your left.

The Light Station & Museum is open seasonally to the public for informative tours. Group tours are also offered by appointment.

The lighthouse is owned by the City of Port Washington. Grounds open, dwelling/tower open for tours.