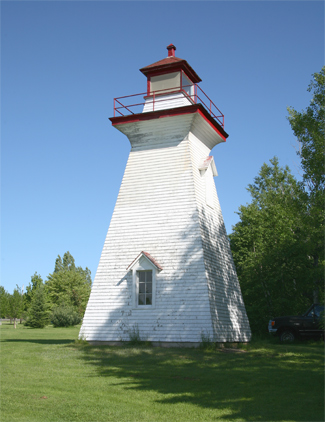 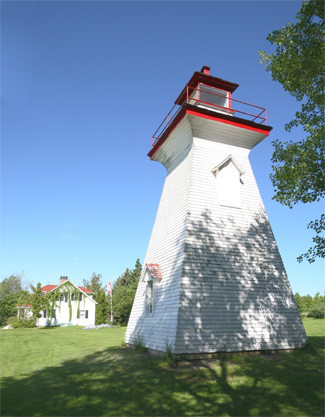 The Miramichi River is the second longest river in New Brunswick after the Saint John River, and Miramichi, consisting of the forced amalgamation of Newcastle, Chatham, and several smaller communities, is the largest city in northern New Brunswick.

Much of the history of the area centers on Beaubears Island, located where the Miramichi River divides into its southwest and southwest branches. The island was a meeting place for the Mi'kmaq, a tragic Acadian refugee camp, a thriving shipbuilding centre, and now a National Historic Site.

In 1765, William Davidson and John Cort arrived in the area from Scotland and established a fishery and shipbuilding business on Beaubears Island. Davidson won a lucrative contract to supply ship masts to the British Navy, and in 1773 launched the areas first ship, the Miramichi. The island would pass through several hands over the years, but shipbuilding remained its primary use, with John Russell building twenty-six ships on the island between 1837 and 1850.

Joseph Cunard, brother of Samuel Cunard who founded the famous transatlantic steamship company, purchased a wharf and store on the Miramichi River in 1820. Backed by Samuel and partnered with Henry, another brother, Joseph soon controlled multiple mills, brickworks, stores, a counting house, and at least two shipyards in Chatham.

Several navigational aids were established in the 1860s to help protect the maritime traffic accessing Miramichi Bay and River. Range lights were established on Fox Island at the southern entrance to Miramichi Bay in 1862, and in 1869 a lighthouse was placed on Portage Island to mark the northern entrance. Also in 1869, range lights were established at Grant Beach and at Oak Point. Acquisition of sites and construction of these range lights cost $1,136.34, and the beacons were first exhibited on May 17, 1869. The Annual Report of the Department of Marine for 1869 noted, The masters of the two lines of steam ships running up the Miramichi, speak highly of the advantage derived from them, in enabling them to navigate the river on the darkest night.

Francis Russell was hired as keeper of Grant Beach Range Lights in 1869 at an annual salary of $100. After the death of Keeper Russell in 1874, George Grant was appointed keeper. Grant Beach is named after George Grant, who was granted fifty acres from lot 'B' on September 2, 1843.

The Miramichi Lightship was placed on Inner Horseshoe Bar, located between Portage Island and Fox Island, in 1873. Additional lights on the Miramichi River were established on Sheldrake Island in 1873, on Middle Island in 1874, and at Newcastle in 1884.

The Department of Marine Report for 1875 noted that pilots had complained that the Grant Beach Range Lights were placed too close together. As they were coming up the bay, the pilots would cross over the Grant Beach Range before the lights separated into two. To remedy this issue, one of the range towers was relocated to Inniss property.

After sixteen years of service, George Grant passed away in 1880, and John Delaney took responsibility for the lights. In 1885, Mississippi lanterns replaced the lamps in use at the station, and the change gave general satisfaction.

Enclosed towers were constructed at Grant Beach in 1903 to replace the previous lights that consisted of lanterns shown from masts with a shed at their base. These new lighthouses, square in plan with sloping sides and surmounted by square wooden lanterns, each stood thirty-seven feet tall from their bases to the top of the ventilators on their lantern rooms. A dioptric, seventh-order lens was used in the front tower at a focal plane of fifty-nine feet, while a catoptric light, elevated 107 feet above the high water mark, was employed in the rear tower. The fixed white lights were visible at a distance of up to four miles and when in range marked the channel from a conical buoy at the narrows of Sheldrake channel up to Malcolm Point. Alexander Fitzgerald of Newcastle erected the towers under a $1,250 contract.

The rear or back tower was moved roughly sixty-five feet to the northeast in 1928 to a position that was 1,300 feet along a bearing of 274° from the front tower.

Byron Savage, a veteran of World War II, became keeper of the range lights in 1961 upon the recommendation of the previous keeper, William Hay, who relocated to Ontario. Keeper Savage recalls his daily routine, for which he was initially paid an annual salary of $150. Each evening I went to the top of each lighthouse, removed the glass globes and cleaned them. I would fill up the lamps with kerosene oil and then light the wicks with a match. I would place the lamps inside the lanterns, replace the globes and the lights were all set for the night. I would go back in the morning to put out the lights.

Robert W. Campbell and his wife Dorothy purchased Grant Beach Front Range Lighthouse in 1986 and hired Lionel Savard and George Bowie to move the tower from a location near the main road to a spot closer to their land on the riverbank, near a beautiful 1825 heritage house. Today the lighthouse sits in a park-like setting where it has been maintained in reasonably good condition. Unfortunately, it is no longer easily visible from the road, but at the right spot it can still be viewed and photographed from a distance.

Marie Eva Savage was the first private owner of the Grant Beach Rear Range Lighthouse. Around 2007, the tower was moved approximately 8 km (5 miles) east of its original location, which was a field adjacent to #339 on the north side of Route 11. The tower now sits in an open field on the banks of the Miramichi River, ironically not far from where the old Oak Point Range Lights once stood. In 2009, the current owners were in the process of renovating the house on the property and planned to paint the lighthouse that summer.

For a larger map of Grant Beach Range Front Lighthouse, click the lighthouse in the above map.

Take Route 11 to the northern side of Miramichi River, and then continue east on Route 11 for 10 km (6.2 miles). The lighthouse is located on private property near #360 Route 11 in Lower Newcastle and can be viewed from the side of the road without trespassing.