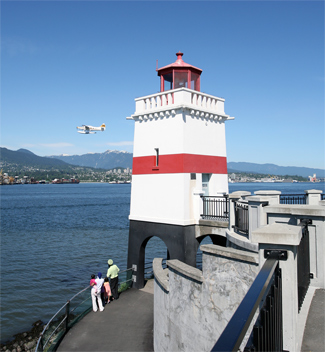 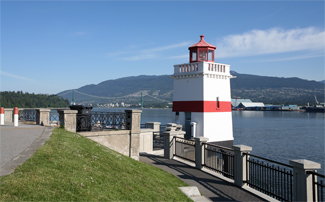 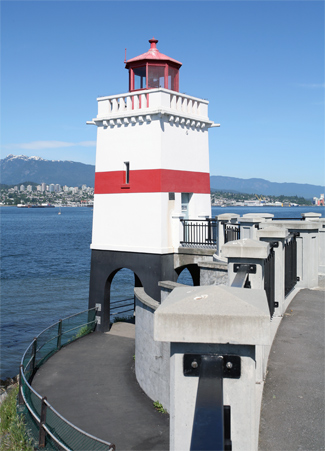 On any bright weekend afternoon in spring, Brockton Point Lighthouse is center stage for a display of sun-starved locals and tourists soaking in the warm, crystal-clear air. Starry-eyed couples are being photographed, hotshots whiz by on Rollerblades, families line up in a caravan of bicycles like ducklings on a pond, and older folks slowly stroll the promenade.

A Stanley Park showpiece, the present Brockton Point Lighthouse was built in 1914, but the story of the light on the point begins in 1890, just a year after the dedication of the park.

Francis Brockton, the engineer aboard the HMS Plumper, which, between 1857 and 1860 was used to survey the British Columbia coast, discovered a vein of coal near Vancouver. The right to bestow names on landmarks was a captains prerogative, and Captain George Henry Richards of the Plumber chose to call the site of the find Coal Harbour, while naming a nearby point, Brockton Point, in honor of his engineer.

With the completion of the transcontinental railroad, Vancouver became a vibrant, growing city in the late 19th century, and, as a result, shipping traffic in and out of Burrard Inlet increased. Prospect Point Lighthouse, established in 1888 on the south side of First Narrows, guided shipping traffic into Vancouver, but its light was hidden to outbound traffic by the lush, dense forest of Stanley Park.

In 1890, a rudimentary light consisting of red and white lanterns mounted on a mast was placed at Brockton Point, two kilometers east of Prospect Point, to mark the sharp turn toward First Narrows for outbound ships and toward Coal Harbour for inbound vessels.

Captain William D. Jones, a testy Welshman, was hired as the first keeper of the light. Provided no home, Jones built a cottage out of driftwood collected from the nearby shore. Jones lived in his home attached to the bell tower for many years, until the impending visit of the Duke of Cornwall and York to Stanley Park provided a compelling reason for the government to construct a more substantial dwelling.

The new house, completed in 1902, included a bay window, located off Jones second-story bedroom, from which a fixed white light with a red sector was displayed to replace the original pole light. A separate wooden bell tower was constructed on the shore at the point. Jones was also provided a new boathouse, as he had previously been instrumental in rescuing several people out on the water.

In 1905, while eating dinner one evening, Jones heard screams coming from the harbour. Abandoning his meal, he quickly rowed out to find a man thrashing in the water. Arriving on the scene at the same time as a yacht, Jones and another man pulled him out of the water and then transferred him on board the yacht, and tried to restore animation until the Doctor came. . . . Had he not died of the shock, we would have saved him. This incident was the ninth rescue since Jones arrived at Brockton Point.

In 1906, tragedy struck again, this time on a much bigger scale, when the MV Princess Victoria slammed into the tug Chehalis. Jones rescued the engineer of the Chehalis, after the engineer barely missed being torn apart by the propellers of the Princess Victoria. Eight people aboard the tug perished in the encounter, and their remains are still trapped inside the Chehalis under ten fathoms of water a few hundred feet off Brockton Point. A memorial in their honor, the Chehalis Cross, is located just southwest of the lighthouse.

To avoid tragedies like that of the Chehalis, Jones was called upon to operate a semaphore station in addition to his other responsibilities. Starting in 1909, Jones would control all outgoing ship traffic, and John Grove, over at Prospect Point would signal all incoming traffic, no matter what time of day. Hiring an assistant to help with this duty cost more than the wage increase Jones was provided, and the semaphore remained a contentious issue until it was discontinued at Brockton Point in 1918.

An additional duty Jones was charged with was the firing of the 9 p.m. gun. Cast in 1816 at Woolwich England, the twelve-pound muzzle loading was brought to Vancouver in 1884. What began as a 6 p.m. Sunday signal to mark the close of fishing hours, the gun was shot daily at 9 p.m. daily to help mariners set their chronometers. It continues to be electronically fired today, startling unsuspecting tourists, and can be seen 300 metres south of Brockton Point.

Jones was known for his flower gardens, which included a floral sundial with a diameter of twelve feet and whose hours were marked by colorful flowers. To raise funds for the Returned Soldiers Club and other charities, Jones cultivated ornate flowerbeds in Stanley Park and sold the flowers. His proceeds amounted to more money than his salary as keeper.

In 1914, Brockton Point was transformed with the construction of the tower which now graces the point. Designed and constructed by Colonel William Anderson, the thirty-five-foot tower is supported by graceful arches, which allows visitors to pass beneath along the shoreline pathway. The lighthouse, with a focal plane of 12.5 meters (41 ft) above the water, has been managed by the Vancouver Parks and Recreation Board since 2006.

Before the Superannuation Act went into effect in 1924, William Jones resigned as keeper since his pension would be better under the old system. Though he was eighty-one, Jones agreed to stay on for one more year as a favour. A string of four other keepers minded Brockton Point Lighthouse after Jones, until the station was destaffed in 1956.

Reminiscent of the lyrics in Joni Mitchells Big Yellow Taxi, after the final keeper left, the house and surrounding gardens were paved over for a parking lot. But the tourists keep coming, and Brockton Point continues to be one of the most popular spots in Stanley Park.

For a larger map of Brockton Point Lighthouse, click the lighthouse in the above map.

Brockton Point Lighthouse can be reached via one-way Park Drive, which circles Stanley Park in a counter-clockwise direction.


While I was admiring Brockton Point Lighthouse, a college-aged guy walked up to me and said, "Excuse me, sir. You look like an old and wise man, and I was wondering if you knew what those bright yellow mounds are across the harbor." I don't mind being called wise, but that was the first time I have been called old. Since I didn't know the answer to his question, I concluded that just maybe his judgment about age and wisdom was a bit suspect.

After returning home, a little research taught me that those neon mounds are sulfur. Alberta produces large quantities of sulfur through hydrodesulfurization of oil and gas, and some of it is transported to Vancouver, where it is stockpiled for shipment around the world.